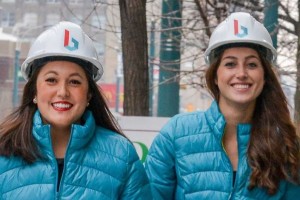 Bridgit, a cloud-based mobile and web communication platform designed for the construction industry, has secured $2.2 million (US$1.7 million) in seed-stage financing. The round was led by U.S. venture capital firm Hyde Park Venture Partners, and was joined by Canadian firm Vanedge Capital. Kitchener, Ontario-based Bridgit, launched in 2014, has so far been used by over 100 contractors and achieved double-digit month-over-month revenue growth, the company reported. It said it will use funds raised to hire new engineers and salespeople and acquire more U.S. customers. Bridgit was previously funded by angel investors.

Bridgit, based in Canada’s technology hotbed of Kitchener-Waterloo, Ontario, plans to use the funding to hire new engineers and salespeople and acquire more customers in the United States.

“The construction industry has been slow to adopt to new technology, but as we talk to residential and commercial builders, it’s clear they are hungry for technology that lowers cost, simplifies processes and make it easier to get their jobs done,” said Mallorie Brodie, CEO and co-founder of Bridgit. “We’re excited to partner with Hyde Park and Vanedge so we can put Bridgit’s solutions into the hands of more people who need them.”

Bridgit was founded in 2012 by Mallorie Brodie and Lauren Lake. Both founders’ families are in the construction industry, and the women suspected it was ripe for innovation. The pair proved the validity of their concept the old-fashioned way – by walking up to construction sites and talking to workers about their challenges and frustrations. Contractors kept track of to-do lists on sticky notes and scribbles on plans nailed to the wall. More organized contractors kept spreadsheets of different tasks and notes, and then emailed or phoned in requests to the appropriate subcontractors.

With Bridgit, commercial and residential builders can use a mobile app to assign and track different tasks. If one piece of work is not completed correctly, the contractor can snap a photo and send it along with relevant notes directly to the subcontractors to make sure it is fixed without holding up other work. Bridgit helps track each task and deadline to hold workers accountable for completing tasks correctly and on time.

To date, Bridgit has been used by more than 100 contractors and has consistently achieved double-digit month-over-month revenue growth.

“As a contractor with 18 active locations, introducing Bridgit across our sites has completely streamlined our process,” said Bob Strum, vice president of Seattle-based Compass Construction. “On Compass’ complex large-scale projects, being able to communicate accurately and quickly is essential to delivering high-quality buildings on time and on budget.”

In December, Bridgit won Google for Entrepreneurs’ inaugural Demo Day: Women’s Edition, beating out 450 applicants from 40 countries. Bridgit was one of 11 woman-led startups to make the finals and the only one from Canada.

“We created Google for Entrepreneurs Demo Days in order to highlight amazing entrepreneurs like Bridgit,” said Mary Grove, director of Google for Entrepreneurs. “Many founders have told us that they’re able to hire more quickly, get the attention of large corporate partners and open doors with investors as a result. We were very impressed by the Bridgit team and their traction at the event, and are thrilled to see them continue that great momentum.”

“We believe that this type of innovation is sorely needed in the construction industry and that Bridgit has the ideal team to deliver it,” said Greg Barnes, principal of Hyde Park Venture Partners. “We can’t wait to see Mallorie, Lauren and their growing corps of experts build upon their solid foundation in the U.S. market.”

“Bridgit exemplifies a strong startup company with a young and effective management team that is taking the latest developments in technology and bringing it to traditional industries to dramatically improve their efficiency and work process. The cost savings to the construction industry will be significant,” said V. Paul Lee, managing director of Vanedge Capital.