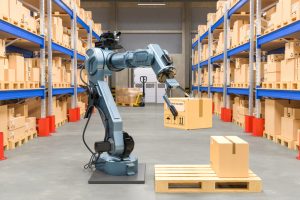 Warehouse workers are the unsung heroes of e-commerce.

Consumers may not think much about the people who pick and pack the goods we receive. But without these workers toiling away in huge, anonymous warehouse facilities, we would never get the multitude of products we order online every day.

The problem, however, is that this fulfillment process is reaching a breaking point.

For starters, e-commerce is growing so quickly, there simply aren’t enough warehouse employees to keep pace with the demand. This year alone, there is a need for an additional 452,000 warehouse and distribution workers, according to commercial real estate firm CBRE. And nobody knows where those bodies are going to come from in an already labor-constrained market.

What’s more, over-taxed and stressed out warehouse workers are prone to mistakes. That’s why even though you ordered that New York Yankees baseball cap online, a New York Mets hat showed up on your doorstep instead.

All this adds up to a growing need for warehouse automation solutions that can help keep the digital economy on track.

“You can’t move the retail economy to 20 percent digital commerce or even 50 percent digital commerce, because there simply aren’t enough bodies to staff these warehouses,” said Mark Siegel, a managing director at Menlo Ventures. “The only way it gets done is through automation. Warehouse automation is being forced on the industry because it’s a need to have, not a nice to have. That’s the only way online businesses will be able to add more capacity and become more efficient.”

Menlo is an investor in two warehouse automation startups. The first is 6 River Systems, which makes a fleet of robots called Chucks that coordinate all the tasks on warehouse floors. The Chucks roam the warehouse, automatically going to the right shelve or bin where the target products are located. Human workers follow the robots and manually pick the products, which speeds the process and reduces errors.

A second, more recent investment is RightHand Robotics, a robotic claw that can mimic human hand-eye coordination and pick the right product, whether it’s a bag of dog food or a bottle of mouthwash. RightHand Robotics, which has raised $34.3 million, incorporates cameras that perceive depth and color as well as machine learning, so every time it picks a product, it learns and gets better and more accurate. A RightHand gripper can cost up to $100,000 apiece for the hardware.

“There is a potential to combine the technologies of 6 River Systems and RightHand Robotics,” Siegel said. “In the future, all e-commerce businesses will need to have a fully automated warehouse. We are still a long way from that reality, but if that’s the end goal, these are the component technologies you have to develop.”

The warehouse automation market was first validated after Amazon paid $775 million for Kiva Systems in 2012. It was a watershed moment, although most people did not realize it at the time. Amazon began rolling out Kiva’s package-toting robots in its distribution centers worldwide and stopped selling the machines to other companies.

“As it turns out, that was a huge component in Amazon being able to grow as fast as they have,” Siegel said. “Traditional retail may not have understood that at the time, but they certainly understand it now. That has really helped spark the demand for automation technologies among retailers and third-party logistics companies.”

As an investor, Siegel is encouraged by the falling cost of automation because it means that warehouse automation startups can be created and funded with far fewer dollars. “All the sensors, machine vision and compute that you need, everything has gotten more powerful, smarter and way cheaper,” he said. “We’ve crossed a magic threshold where these investments make real sense from an economic point of view.”

As Amazon keeps raising the bar with things like one-day delivery in every market, it’s now table stakes for all retailers to be able to be able to get products into the hands of consumers quickly and efficiently. And the only way to do that is with automaton.

The Amazon effect is a key reason why e-commerce companies and third-party logistics companies continue to ramp up their investments in warehouse automation technology and why startups in the space are catching the attention of venture investors.

Here’s some recent deals in the space:

As an investor in warehouse automation, Greg Bettinelli at Upfront Ventures is not worried about how big the market can get. He’s more concerned with how quickly it can get there.

“The big challenge as an investor is the timing of this market,” he said. “Nobody doubts that it will be huge. But identifying those companies that are serving the market at the right time is a challenge.”

He said he’s seen too many companies that have built technology that serves the wrong customer at the wrong time. “You might have a great product, but if it’s too far ahead of itself, it won’t go anywhere,” he said. “The trick is to manage where the market is and where customer appetite is. Understanding that timing is critical when making an investment here.”

After all, there have been some significant startup failure in this space, even among some very full funded companies. Most recently, Rethink Robotics, a highly touted maker of collaborative robots, shut its doors last fall after raising nearly $150 million.

Bettinelli invested in InVia Robotics precisely because he thinks it the right technology for the right time and at the right price. The company, whose robots help automates repetitive warehouse tasks and eliminate warehouse walking, recently raised $20 million in a Series B round led by Point72 Ventures, with participation from Upfront Ventures and Embark Ventures.

“There have many companies in this space that have raised a lot of money to build their technologies,” Bettinelli said. “But what really appealed to me about InVia is that they built a working product with only about $3 million in capital. They have a very low-cost robot that that sells for under $5,000, while others are substantially higher. InVia is delivering an automation solution at a cost that is very attractive to small, middle and large customers.”

He was also attracted to InVia’s Robotics-as-as-Service model. He said that if InVia can build a robot and sell the software to support it on a recurring basis, then they have greater predictability around their revenue. It also makes it easier for smaller businesses that don’t want to deploy millions of dollars upfront but would rather pay on a monthly or yearly basis.

“The world is going recurring,” Bettinelli said. “The robots themselves are becoming a commodity. It’s the software that sits inside the robots that is most valuable, and the recurring model is the way most software is sold today. There is no reason why it should be any different for robotics.”

In terms of exit paths, venture investors in the space see no shortage of opportunities. Possible acquirers include the larger providers of warehouse management and distribution systems, as well as established robotics company, such as ABB Robotics, or even massive industrial companies Siemens and GE, which are hungry for new growth opportunities.

And, of course, just as Amazon snapped up Kiva, it could continue to make acquisitions in the space, as could Amazon’s rivals.

“Think about the Walmarts and Targets of the world,” Bettinelli said. “What large retailer wouldn’t want to own this kind of technology, especially if I can deliver a competitive advantage.”