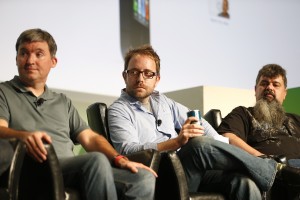 One would think that the last thing a prominent VC or angel investor would want to do is pay carried interest to someone else for finding hot startups.

But looking at the list of investors in syndicates on online angel network AngelList, it’s clear that plenty of VCs and angels are happy to fork over a portion of future profits to seed backers they admire.

Syndicates launched by such well-known people as entrepreneur and best-selling author Tim Ferriss, Google Ventures Partner and Digg founder Kevin Rose, and Foundry Group co-founder Brad Feld, include a high proportion of fellow seed and early-stage investors among their backers.

Ferriss’ syndicate, which counts nearly 500 backers and $2.6 million under management, has raised capital from Jeff Lu, an associate at Battery Ventures, Naval Ravikant, the founder of AngelList, and Steve Hoffman, co-founder of incubator FoundersSpace, among others.

Members of the syndicate agree to pay Ferriss 20% of carried interest and to invest a minimum of $1,000 in his companies, consumer Internet startups in the U.S. and Canada. Ferriss’s previous investments include TaskRabbit, StumbleUpon and Uber.

To date, Rose has just over 700 backers and $3.7 million under management. His syndicate, which targets consumer Internet and mobile startups in Silicon Valley and Portland, Ore., provides its manager a 5% cut of carried interest—far lower than what Ferris offers.

Startups that Rose has backed include Fab.com, Square, Zynga and Foursquare.

Last month, 500 Startups announced the launch of two AngelList syndicates, called the 500 Startups Syndicate and the 500 Women Syndicate, with each receiving $1 million from 500 Startups. Investors in 500 Women include Rashmi Sinha, CEO of SlideShare; Prerna Gupta CEO of Khu.sh; Ruby Lu, general partner of DCM; and Wei Hopeman, head of Asia at Citi Ventures and co-founder of Angelvest.

Yet another syndicate, FG Angels, managed by the partners at venture firm Foundry Group, has raised about $440,000 from more than 200 investors. Backers include Jonathan Abrams, co-founder of Founders Den and early social network Friendster, David Cohen, founder of accelerator program TechStars, and David Tish, managing partner at early stage fund BoxGroup and co-founder of TechStars NYC.

Foundry group is committing $2.5 million to FG Angels, with a goal of making 50 investments by the end of year in software and mobile. Syndicate members agree to provide FG Angels with 20% of carried interest.

AngelList opened its platform to syndicates last year, as a means to allow accredited investors to co-invest with “notable investors.”

The way the system works, the lead investors put their own money into a company, and members of the syndicate also contribute capital.

Others with syndicates on AngelList include Peter Relan, founder of accelerator Studio9plus, Jason Calacanis, founder of the Launch conference and angel investor, and Salil Desphande, a managing director at Bain Capital Ventures.