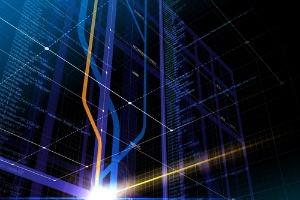 Recently the National Venture Capital Association (NVCA) – in conjunction with Thomson Reuters and PricewaterhouseCoopers – released 1Q12 funding data for the VC industry, and frankly the numbers are startling – but yet in some sense, upon reflection, not surprising. For the quarter there were 758 deals which raised $5.8BN, which was down 19% on a dollars basis and down 15% for deals from 4Q11. If you were wondering, these levels are down 13% (dollars) and 12% (deals) when compared to 1Q11.

The VC industry is contracting and consolidating swiftly, but oddly the amounts invested have been tracking meaningfully ahead of the dollars raised by VC firms. The graph below shows that the lines have been diverging for nearly four years – this won’t end well. Clearly the dramatic reduction in amounts invested in this past quarter suggest that the lines may now be starting to converge – at a minimum trending downwards and probably settle at meaningfully reduced levels, perhaps as low as $12 – $15BN per year for both amounts raised and invested. Ironically they may still not converge as the VC industry struggles to raise capital. 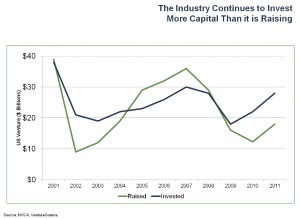 As I studied the data this weekend I observed a number of other important themes which entrepreneurs should be mindful of as they consider raising capital.

 Even the Software category was soft in 1Q12 – $1.6BN across 231 deals which was down 18% in dollar terms from last quarter (average size ~$7MM per financing)

 Even Semi’s were not spared, down 43% in dollar terms quarter-over-quarter

Clearly as the VC’s invests fewer dollars in any given quarter, most categories will be down. What is most striking is the continued and strong rotation away from industries that have significant scientific and regulatory risks, and are also characterized by long times to generate investor returns. Notwithstanding popular opinion, VC’s aren’t dummies.
Other observations around stage are also notable.

 Late Stage investing was up 11% this quarter and represented 40% of all deals. Clearly there is a rotation to opportunities nearer to liquidity, which most funds need to show in order to raise new funds. There was $2.3BN invested in 208 Late Stage companies this past quarter which was consistent with the $2.4BN and 234 deals in 1Q11.

 “End of the Great Seed Experiment” which is something I have been saying for the better part of a year – there was only $141MM invested in 53 deals in 1Q12 (admittedly I think that number is under-reported) as compared to $156MM and 90 deals in 4Q11 and strikingly to the $211MM and 86 deals in 1Q11. I have been on this thread for some time; that is, the VC industry is at risk of having created too many “me too” companies, and with less capital to invest across the board, many seed entrepreneurs will be deeply saddened when they come back to market for their Early round…

 Softness in Early rounds – $1.6BN was invested in 290 companies which were materially down from $2.3BN and 382 deals in 4Q11 (and somewhat so from 1Q11 – $1.8BN and 320 deals). VC’s over the last few quarters went very early (how many “seed programs” were started?!?) and now they are going later to either support existing portfolio companies or buying pre-liquidity companies.

The geography debate also grinds on with some surprising data in 1Q12. Of course the Valley still dominated – not newsworthy – but there was some hint of re-ordering of the silver and bronze winners.

 Massachusetts had $628MM invested in 90 companies as compared to $678MM in 97 deals in all of New England. The data for Massachusetts in 4Q11 was $757MM in 92 deals, so some meaningful deterioration quarter-over-quarter, but not as severe when looking at 1Q11 data of $670MM in 86 deals.

Michael Greeley is a general partner with Flybridge Capital Partners. Opinions expressed here are entirely his own.