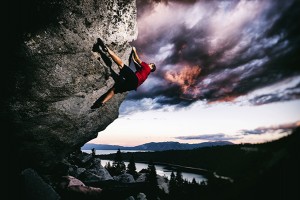 September marks the start of elk hunting season in Idaho. Temperatures fall to the low 30s in the Sawtooth Mountains. Icy rain makes for treacherous conditions in the deadfalls, nearly impenetrable thickets of fallen trees and brush.

Navigating a maze of rain-slicked logs tests your mettle. Doing so with 120 pounds of butchered elk strapped to your back is another matter entirely.

“The strength that it requires. You have to dig deep to the core of yourself and who you are as an individual to get your ass out. You do. And then it turns dark,” says Matt Rissell, an avid outdoorsman and founder of Eagle, Idaho-based timesheet software company TSheets.

“There are so many moments when you just want to give up. And it would be so easy to just take your backpack, pop the buckles,” he says, as he clicks his tongue click-pop, “drop the weight and just run for the truck.”

Rissell almost popped the buckles on TSheets. His linebacker build slumps over the conference table in his office when he says the company almost folded after four separate false starts. An effort to get employee timesheet software to go viral failed. The company’s sales team couldn’t generate traction by cold calling small business owners.

Rissell couldn’t call on venture capital or growth equity stakeholders for support, either. Like many Boise-area startups, TSheets lacked venture and growth equity backing. VCs committed just $56.3 million to Idaho businesses over the last three years, according to date from the National Venture Capital Association.

Now, TSheets ranks among the most highly rated apps in the Intuit QuickBooks ecosystem. In October, Summit Partners committed $15 million of growth equity to help the company expand its headcount and customer base.

“People in Boise, all the time, say, ‘Oh, the investment community here is not as sophisticated. It’s really hard to get financing in Boise.’ And honestly, I’d say that’s B.S.,” Rissell said in a November interview in his office, which used to house an oral surgery center. “There are a tremendous amount of investment firms that have money they need to put to work, and they are looking feverishly to find companies to invest in. Simple as that.”

TSheets is one player in Boise’s nubile tech scene, which is beginning to attract attention from some outside players. In April, Cradlepoint raised a $48 million Series B round of funding led by Sorenson Capital. Airbnb formed a partnership with with vacation rental software company LiveRez, whose office is in Eagle. Audience engagement technology developer Klowd was acquired by marketing firm Freeman in January.

Other early-stage companies, such as Inteliscope, AmericanPharma Techonoligies and LeanLaw, have raised small funding rounds in the last year, according to CrunchBase, and healthcare analytics startup Proskriptive and Inergy Solar have attracted interest from Silicon Valley, said Startup Grind Boise Director Jess Whiting.

“I’m seeing more interest (from VC firms) out of Salt Lake, Seattle and Boulder,” said Michelle Crosby, a 2013 YCombinator alum who founded Bothell, Wash.-based Wevorce, which assists individuals or couples with divorce. “I don’t think it’s a deal killer anymore, and (being based in Boise) used to be a deal killer.”

Summit, in particular, has been an active investor in the region for over a decade. Prior to TSheets, the firm’s portfolio includes or has included Boise-based companies like Clearwater Analytics, Extended Systems and ProClarity, a business intelligence software company acquired by Microsoft in 2006.

Mainstay Idaho venture firm Highway 12 Ventures has long called the city home, but the firm said nearly five years ago that it will not raise a new fund. However, the local VC ecosystem may be getting a boost, as a new entity called Trolley Horse Ventures recently started providing guidance and seed capital to early-stage companies in the region (including Proskriptive). Trolley Horse, which includes a collective of angel investors previously referred to as Fort Boise, is led by Bob Dean, Tom Mahoney, Marshal Simmonds and former KPMG executive John Hale.

“The need is really strong in Boise,” says Hale. The dearth of early-stage backers and mentors causes many Boise entrepreneurs to stumble over their own ambitions prior to a product launch. “What we see quite a bit here in the early days of our fund is that a lot of people burn through their savings, their ramp, before they determine whether anyone will buy their stuff.”

That, in turn, leads to a preponderance of haphazard seed rounds. Friends-and-family backing arrives sporadically in $5,000 or $10,000 chunks, complicating the capital stack and putting the company in a weak negotiating position for its Series A funding, Hale says. In addition to putting its partners capital to work, Fort Boise plans to ease this process by arranging sidecar vehicles for local startups’ individual backers.

Perhaps more importantly, Fort Boise will also act as an advance scout for larger firms in Boulder, Seattle and Silicon Valley. Boise and Sun Valley are popular destinations for skiers, hikers and fishermen, and many VCs look to “combine business with pleasure” when they visit the region, Hale says. At least three outside firms pledged to set up regular meetings with Fort Boise to stay abreast of the city’s startups, Hale says. Other firms have expressed interest.

“It takes a few investments to draw a critical mass of investment, and because we’re just now starting to grow, and seeing investments come in here, I think that will help alleviate the challenge,” says Whiting, a longtime booster for the region.

Beyond the expansion of its venture universe, Boise is also benefiting from a larger pool of engineering and computer science talent. Last year, Boise State University recruited Gordon Jones, the former head of Harvard University’s innovation lab, to take a position as the dean of its new College of Innovation and Design. The university is also home to TechHelp, a partnership between the state’s three state universities, which includes a new product development lab that provides engineering and prototype services for local start-ups and manufacturers.

“It was fascinating to me … the level of understanding and engagement the university has as it relates to what it takes to foster entrepreneurship,” Kupor said during a keynote interview, adding he found Boise State’s efforts to develop young engineering talent “refreshing, and very, very reassuring.”

The state government also entered the mix, passing a series of tax incentives in 2014 to attract more companies to the state. Companies that create at least 50 new jobs in an urban community, or 20 in a rural community, are eligible for a refundable tax credit of up to 30 percent on income, payroll, and sales taxes for as long as 15 years.

The program helped 16 companies expand in its first year, adding roughly $1.3 billion in new payrolls to the state, according to Idaho’s commerce department. In Boise alone, incentives were partially responsible for the formation of about 1000 jobs.

The incentives complement an already low-cost business environment. Rent for commercial space in Boise’s bustling downtown is only a fraction of what it would be in the Bay Area. LoopNet, a commercial real estate database, reports that the median asking price for office space in Boise is less than one-fifth of that in San Francisco. The relative affordability allowed the city to maintain much of its culture, including a thriving Basque cultural district, while encouraging development.

“We’re well suited to have a really thriving tech industry because of the quality of life. It’s much less expensive, much less expensive, to build a company in Boise, Idaho, than it is in San Francisco,” Rissell said. “I don’t care if a business is in Boise, St. Paul, Minn., or a tiny town in Alabama. I don’t think it matters where you’re located. If you have a really good company and a real business, you can find people who will invest in it.”

For a small list of VC-backed investments in the region: Select VC-backed Idaho companies