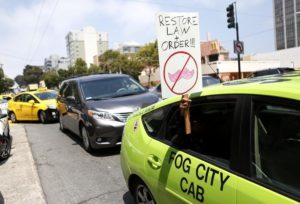 (Reuters) – Bills that would make it more complicated and expensive for ridesharing companies to do business in California passed a state Senate committee on Tuesday, although stripped of one particularly onerous provision.

Companies such as Lyft, Sidecar and UberX allow passengers to summon paid rides using apps on their smartphones and have gained in popularity in dozens of U.S. cities over the past few years.

While popular with investors, ridesharing services face opposition from taxi companies, which argue that the upstarts do not face the stringent regulation they do, while insurance companies want ridesharing drivers to carry more expensive insurance policies.

The bills, which have already been approved by the State Assembly, must still pass the full Senate before becoming law. They are scheduled to go before a Senate insurance committee next week.

In a victory, at least for now, for the ridesharing companies, a provision in one bill that would have required drivers to upgrade to expensive commercial policies from personal policies was stripped out by the Senate Energy, Utilities and Communications Committee.

Ridesharing companies argue they already carry commercial policies which kick in when drivers accept rides on their apps.

That bill, AB 612, retains provisions such as requiring mandatory drug and alcohol tests for all ridesharing drivers, which ridesharing proponents say might deter some casual drivers.

The second bill, AB 2239, would require ridesharing companies’ insurance to cover drivers from the moment they turn on their app, not just from when they accept a ride on their app.

The move to dictate more extensive coverage stems from a New Year’s Eve incident in San Francisco when an UberX driver killed a child while his app was on, but before he had accepted a ride.

Ridesharing companies say the second bill is not fair as it could potentially leave them liable for hours of driving time when a driver has an app turned on but doesn’t accept rides.

Separately, the California Public Utilities Commission, which is seeking to regulate ridesharing in the state, has scheduled a July 10 hearing for its own proposed rules.

Those rules would also require the ridesharing companies’ insurance kick in from the time drivers turn on their apps.

Uber, which also operates a higher-end black car service that is separate from its UberX ridesharing service, used a blog post last week to ask its California customers to tell their senators they didn’t like the bills. Many of its customers tweeted their support of Uber, and some of its drivers demonstrated outside the California legislature Tuesday.