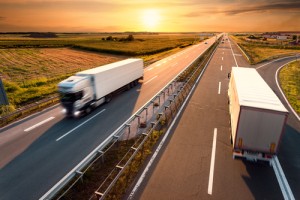 Canvas Ventures this morning announced it has led the $12 million Series A funding round of Transfix, as it aims to modernize the long-haul commercial trucking industry. Existing investors Lerer Hippeau Ventures, Founder Collective and Bowery Capital also took part in the round.

Canvas Partner Ben Narasin, who took part as an angel investor in the company’s $2.5 million seed round in July 2014, said the long-haul trucking industry is ripe for mobile innovation.

“Some trucking brokers still use faxes and phones calls to coordinate with carriers,” Narasin said. “Email is about as advanced as some in the industry get.”

Transfix reports that in 2014, heavy-duty trucks drove 381 billion miles in the United States, and the trucks had no cargo for about 50 billion of those miles. With its online marketplace, Transfix matches shipments with trucks based on location to help decrease empty payloads.

The investment was the first one at Canvas for Narasin, who joined the firm in September. Narasin along with fellow Canvas Partner Paul Hsiao have joined the board as a result of the Series A round.

Photo of trucks courtesy of Shutterstock.