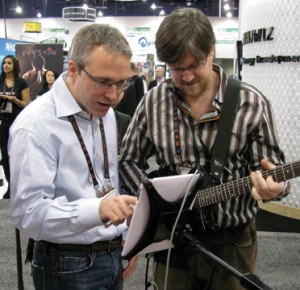 , the first day of the giant CES 2011 show, and strains of a guitar cut though the din of the exhibit floor. Jason Mendelson hardly notices the competing sounds as he taps intently on an iPad.

Next to him stands fellow Foundry Group Managing Partner Ryan McIntyre, clutching the guitar. Mendelson is adjusting its musical effects with an iPad app.

“Every year there is someone trying to make a better guitar,” says Mendelson, a musician and CES veteran. When Mendelson and I passed one such example minutes earlier, a product that required a player to insert an iPhone under its strings, he noted dismissively: “It looks like a toy.”

But now he is engrossed. Griffin Technology’s foot pedal and audio hardware turn an iPad into a recording studio and McIntyre is banging out raspy chords. It is a great application. You can see it in their faces.

This haptic, hands-on, expression-provoking experience is what turns CES into a technology laboratory for Mendelson, McIntyre and the 250 or so other VCs who make the annual migration to the world’s largest technology trade gathering. This year is no exception: freshly minted tablet computers, 3D display screens, touchscreen apps and Internet television capture imaginations and stir the investment juices of these venture investors.

Most come with a thesis and explore the latest trends before leaving with a databank of knowledge that they will add to sometimes for years before handing a dime to an ambitious young startup.

Some of the VCs work the show floor, sometimes waiting until the crowds thin out in the late afternoon so product marketing managers are more talkative. Others measure the traffic at the booths of their own startups. Still others take meetings with young companies they have been following, but haven’t yet had the chance to dissect.

And most of all, they put their fingers in the air to see which way the industry’s currents are blowing and to find out what’s new and what’s hype.

“I’ve got a couple of theses and I’m trying to figure out if they make sense,” says Paul Weinstein, a general partner at Azure Capital Partners and a supporter of the late afternoon show floor walk. “I’m not prospecting for deals.”

Weinstein says the show’s value is its all-under-one-roof opportunity to collect a lot of information and make contacts—particularly this year on the connected home—and whether the Internet is changing the nature of television. The assumption by many is that as more people discover TV content online, from Hulu or Netflix, the more likely they will be to cut the cord to traditional cable providers Comcast or AT&T.

Weinstein says he expects some clarity on which companies will dominate the sales of video-related devices into the home, such as with Roku, for instance. He is not yet convinced he will learn whether a subscription, on-demand or advertising business model will dominate among content providers and startups.

We don’t talk too long. He is on the move and new booths await his visit.

It is now 3:30 p.m. on the show’s first afternoon and I am standing in front of a flat screen TV as Jonathan Seelig, managing director at Globespan Capital Partners, changes channels with the flick of his fingers. Hand gesture control of TVs and laptops is emerging from the technological shadows and was among the most inspiring developments of this year’s CES. I later visited the booth of Tel Aviv, Israel-based PrimeSense, which is backed by Canaan Partners, Gemini Israel Funds and Genesis Partners and which supplies technology to Microsoft’s Xbox 360 Kinect and which has a new, compelling TV interface.

Seelig is looking closely this year at TV integration, an umbrella term for packing all sorts of new things into the boob tube, including Internet connections, programming options and even hand gesture controls. He says he feels like it is the year when consumer electronics companies will make progress.

But it is no simple task. We pass by a display of TV navigation software at the LG Electronics booth. “Not even close to ready,” Seelig says. The system is unresponsive and hard to figure out.

Yahoo Connected TV was equally uninspiring. “This is very hard,” he says. “I don’t think it’s at all obvious.”

His strategy is to look at the efforts of big consumer electronics vendors, such as Sony and Samsung, to decide whether there are opportunities for startups with independent, stand-alone products.

But there is little time to dawdle. I am off to see Steve Goldberg, a partner at Venrock and a show veteran of 20 years, two as a VC. Goldberg is looking at energy efficiency software for the home and despite a special Sustainable Planet section at the show, home energy product displays and companies are relatively few and far between here.

But that is when a VC is suppose to strike, and Goldberg is busy trying to figure out where companies fit into the broad ecosystem of components, software and services.

“You can’t just walk into Best Buy and figure it out,” he says of why he hopped on a plane in the San Francisco Bay Area to go to Las Vegas.

Bijan Salehizadeh, a general partner at Highland Capital Partners, would agree. He is spending his time at the show scouring the booths of health care and consumer tech companies looking for dislocation in the health care markets.

Consumer electronics are finding their way into the medical business and gaming, computing and health care are coming together to create new products, he says. This has started in personal fitness and is just now coming to treatment and diagnosis.

“The goal of the show is to get a lay of the land—CES has a Digital Health Summit section—and to “look for the mobile health…technologies that I think are finally taking off,” he says.

So what is the takeaway? Today, many health care professionals carry iPhones, as proprietary hardware disappears and smartphones and a growing number of tablets open up the market. That means startups can concentrate on more capital efficient software business models, Salehizadeh says. “That’s what I want to invest in.”

A surging crowd marks the start of the show’s second day, and we are searching for a cloud-based gaming startup by the name of Gaikai Inc. The Aliso Viejo, Calif.-based company’s business plan permits consumers to play demos of computer games before buying them. What better way to spur sales than to offer a taste of the forbidden fruit? The site is in beta testing and the hype is already building.

I’m with Sharon Wienbar, a managing director at Scale Venture Partners and a venture capitalist on the prowl for investment opportunities in app developers . She is intrigued by this year’s raft of tablet computers and the notion that Web content now has to be mobile because of these portable devices.

“Part of the [show’s] value is seeing what’s happening and what’s hot,” she says. Touchscreen devices are more than just warm to the touch. In fact, one surprising observation, Wienbar says, is the diversity of devices running software on the Google Android, such as automobile navigation systems and even oven thermometers.

Wienbar has a long list of emerging companies to track down, but CES is more than just the show floor to her. It is about building relationships with GPs who sometimes invest in syndicates alongside Scale. So there is the annual Scale dinner to attend.

Getting to know the investment interests of these co-investors and how they might react to problems is a valuable face-to-face exercise. Foundry also has a dinner, an event meant to bring its far-flung portfolio of startups together.

“They all need to be here already,” says Seth Levine, a Foundry managing director. “There’s a lot of shared learning.”

Sometimes that learning is a referral to an Asian design firm. Other times, it is business advice. “You never quite know what you’re going to get out of it,” Levine says.

As the midday crowd shuffles by, I am standing alongside Foundry’s Mendelson looking through 3D glasses at an experimental OLED, or light emitting diode, television from LG Electronics. “To me, that’s the coolest TV I’ve ever seen,” he says. The crisp 3D image looks less layered and more fluid than other 3D sets.

Later we wander through the Sony booth to see a prototype of a flat panel 3D TV that no longer requires viewers to wear glasses, a new technology this year. It is a good first attempt and less jarring than the models with glasses that always seems to have reptiles leaping from their screens. “Sony always has one of the best images,” Mendelson says.

I agree. But then I think that perhaps the best image is the show itself, the cacophony of products, chatter and ideas. That is why, I realize, we come back year after year.