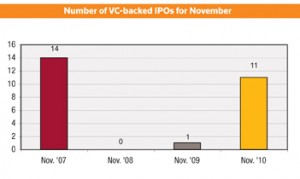 China-based, VC-backed companies continued to dominate the IPO landscape in November and early October, as more line up to go public in the new year.

In November, 11 venture-backed companies (including six based in China) went public, raising more than $1 billion in proceeds.

In 2010, Chinese IPOs in the United States hit a record high of 35. Based on the number of offerings, Chinese issuers accounted for 23% of U.S. market IPO activity, up from 1%, according to Thomson Reuters (publisher of VCJ).

More than half of this year’s Chinese IPOs in the United States come from high technology, consumer products, industrials and retail sectors.

What remains to be seen is whether aftermarket enthusiasm for the China IPOs is on the wane. Sequoia Capital-backed SinoTech Energy Ltd., for instance, saw its share price drop a quarter of its value in early December when the oilfield services company reported a net loss for the fourth quarter of $6.5 million, compared to a profit of $3.2 million, a year ago. Nevertheless, in its forecast, SinoTech expects sales to reach between $90 million and $95 million in 2011, up from $45.3 million in 2010.

Sequoia Capital was also the venture backer of Noah Private Wealth Management Centre Co. Ltd., which went public in early November. Shares of the company jumped 33.3% in their market debut as investors bet on a growing middle and upper class in China.

U.S. investors have proved eager to tap China’s rapidly growing consumer base, and China-based companies have been among the best-performing IPOs in the United States this year. Wealth management businesses have also been eyed for investment because of their steady revenue streams.

“It’s a high-demand area of the marketplace,” said David Menlow, president of IPOfinancial.com, recently told Reuters. “This is a sweet spot … China.”

No letup appears to be in sight for Chinese companies seeking an IPO, especially in the social networking space.

Oak Pacific Interactive, a Chinese Internet company that has created Renren, which is backed by DCM and is known as the “Facebook of China,” and Nuomi, known as the “Groupon of China,” has hired Credit Suisse Group AG and Deutsche Bank AG to underwrite its IPO slated for the first half of this year, sources told Reuters in early December.

TaoMee, a social networking site for children, was also planning to list late next year and would conduct its road show for investment banks in the first quarter of 2011, said a source familiar with the situation. Reuters recently reported that social networking site Kaixin001also plans to list but has not gone through the process of selecting banks.