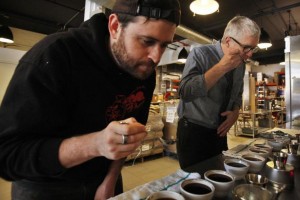 Coffee may not be everyone’s cup, but a few intrepid venture investors are warming to the beverage.

VCs are not abandoning their traditional tech roots to build some grand thesis around coffee.

“Our investment in Philz Coffee wasn’t about the coffee industry per se,” said Greg Goldfarb, the managing director at Summit who led the round.

“We didn’t see some tectonic shift in the market or have a brilliant crystal ball. This was about backing Phil and Jacob Jaber (the father and son team behind Philz), who are special entrepreneurs with great values, passion and an exceptional focus on delivering a great customer experience. Coffee is a sizable market, but our thesis and desire to invest were specific to Philz.”

That theme was echoed by Tony Conrad, a founding member and venture partner of True Ventures. He said his firm’s enthusiasm for the Blue Bottle investment did not start with the coffee business.

“As classic early-stage venture investors, we are not really looking for physical retail opportunities. … But once we got introduced to Blue Bottle and looked at the market, we did see that incredibly exciting things were happening.”

“It really was all about Blue Bottle and its unique characteristics,” he said. “As classic early-stage venture investors, we are not really looking for physical retail opportunities. We didn’t sit down and say, ‘Hey, of all the industries out there, coffee is the most exciting.’ But once we got introduced to Blue Bottle and looked at the market, we did see that incredibly exciting things were happening.”

True Ventures’ thesis is that coffee has entered its third wave.

The first wave was the pre-ground beans packaged by companies like Folgers and Maxwell House. Next came the Starbucks and Peet’s of the coffee consumer world, which introduced Americans to more exotic flavors and elevated a cup of Joe from a humdrum product to a lifestyle and experience.

The third wave is about taking coffee to a whole new level of quality, such as sourcing from farmers who adhere to the highest standard of sustainability, and working with small growers who are passionate about producing the best beans.

“We think of coffee as a commodity, but it really is becoming more like wine,” Conrad said. “Farmers are using different soils and techniques to make the most magical coffee beans on the planet on these small plots of land, just like the very best wine producers.”

The latest wave has manifested itself in the form of ultra-popular West Coast coffee houses, such as Philz, Blue Bottle, Sightglass and Sumptown. The goal now, with the help of venture funding, is to grow these businesses from their humble roots into national chains. Philz, for instance, currently has 14 locations in the Bay Area, while Blue Bottle has five stores in the Bay Area and four more in New York.

“We think the Philz Coffee concept is broadly applicable,” Goldfarb said. “There are lots of locations that would love to have a Philz. We want to grow the footprint of the company, but stay obsessively focused on delivering a wow customer experience.”

Reaching scale is a key challenge facing these third-wave coffee investments. It’s hard to imagine any of the emerging chains growing to the size of Starbucks, as the moment they become ubiquitous is probably also the moment they lose their craftsmanship – the very reason why hipsters and coffee lovers go there in the first place.

Indeed, an outfit such as Blue Bottle prides itself on being the anti-Starbucks, right down to its policy of having no Wi-Fi in the stores. It even studiously avoids electrical outlets because it doesn’t want customers banging away on their computers and messing with the ambiance.

Investors are not concerned that these new coffee chains could lose their appeal if they become too popular.

“If we had all the money in the world and were able to open store after store, I don’t know if we could keep up with the growth of the third wave coffee movement,” Conrad said. “Could I imagine a Blue Bottle on the opposite corner of every Starbucks? I don’t think we would impact Starbucks one iota, but I also think the Blue Bottle on that other corner would do incredibly well. We can be that kind of scale.”

Another challenge more specific to venture investors is that while VCs are good at nurturing young technology companies, those skills typically translate poorly to the consumer retail space. Even Conrad admits he has to shut down some of his natural impulses with the Blue Bottle investment.

“Our involvement in Blue Bottle should be to empower [founder] James Freeman and [CEO] Bryan Meehan, and then get out of the way,” he said. “For VCs, that is antithetical to how we work.”

Conrad initially planned to do the deal as a private investor and not as part of True Ventures. But when he told his partners he was planning to invest several million dollars of his own money in the company, it caught their attention.

“At first, Blue Bottle felt off target for the firm, but then my partners asked why I wanted to invest millions,  and not just $25,000 like a normal personal investment,” said Conrad. “I  walked them through the market, the leadership, and why the company was special. At True, we want to back products that capture our imagination and companies that are leaders of a movement. Through that lens, Blue Bottle fits right in with our technology investments.”

Summit’s Goldfarb said that he sees growing similarities between the technology and retail spaces.

“In the old days, companies sold license software, so the vendor could get away with good salesmanship and not necessarily happy customers. But tech has moved to a subscription model where customers can leave that product any time they choose,” he said. “So now the vendor has to invest more in making sure that customer is happy with the product literally every day. And that is the core challenge and risk for a tech business and for a consumer retail company. In both cases, you win the war by fighting a million little battles to delight the customer.”

Of course, it also helps that there is actually a technology element to investments like Philz and Blue Bottle. Both companies have a growing e-commerce presence, selling their packaged beans and blends to thirsty customers around the world.

“The e-commerce element absolutely factored into our thoughts,” Goldfarb said. “Still, at the end of the day, this is a retail business and the in-store experience is a big part of why we made this investment.”

Tom Stein is a Palo Alto, Calif.-based contributor. He can be reached at tom.stein@yahoo.com