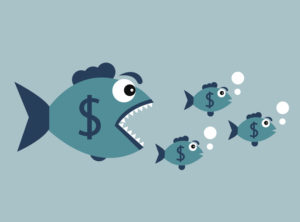 Last year, VC exits were dominated by the IPO market. But the year also registered a respectable share of activity for mergers and acquisitions.

While the total number of venture-backed M&A deals in the North America fell 11.8 percent to 868, the portion of VC-backed companies compared to the total M&A market continued to grow. Overall, acquisitions of venture-backed companies reached a record 8.7 percent in 2019 of all M&A activity across North America, up from 7.6 percent in 2018, according to the latest report from PitchBook.

In fact, M&A of venture-funded companies approached the level of PE-sponsored mergers and acquisitions, which accounted for 9.5 percent of all transactions, the report found. The last time VC-backed exits exceeded PE-sponsored exits was in 2009, at the height of the Great Recession. 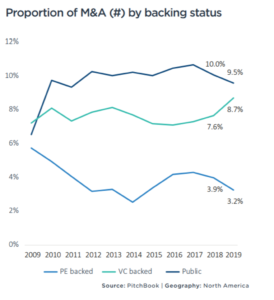 Some recent deals have in part been driven by strategic buyers’ interest in purchasing technologies from VC-backed companies rather than building them in-house, according to the report. Corporates have found that acquiring tech startups is more cost-effective, and this trend will likely continue amid VC-backed companies’ tendency to stay private for longer periods, the report predicts.

Examples of such transactions from last year include PayPal’s $4 billion acquisition of Honey. The deal is expected to help PayPal acquire customers earlier in the deal discovery process.

In another notable acquisition, Google paid $2.6 billion for Looker, a data analytics startup, to help the tech giant compete better with its Google Cloud offering.

Last year’s overall M&A activity was dominated by mega-deals, including Bristol-Myers Squibb’s purchase of Celgene for $74 billion and 21st Century Fox’s sale to Disney for more than $71 billion.

Large deal sizes, combined with extremely low-interest rates and robust public markets, helped to not only keep M&A deal-making at elevated levels but also led to an increase in valuations, the report says.