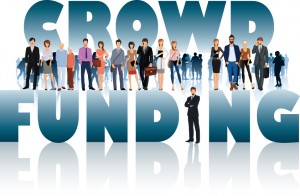 Several days after the New Year’s Eve Champagne bottles and confetti were swept up, 2016 began with a crowdfunding bang.

Virtuix, the developer of a virtual-reality game-play platform, kicked off a test-the-waters campaign on SeedInvest under the new Regulation A+ rules.

The goal was $5 million to $15 million for a Series A round (companies can raise up to $50 million under the rules). The response was $12.9 million of indicated interest as of mid-January. Not bad for a couple weeks of trying.

The company, while not the first to take advantage of Reg A+, demonstrates the power of a changing crowdfunding landscape.

“We’ve always been at the forefront of crowdfunding,” said Virtuix founder Jan Goetgeluk. Now “for the first time we let our community know they can potentially invest with us and invest alongside Silicon Valley VCs.”

Equity crowdfunding has hardly been a siren song for the venture community since such sites as AngelList took root five years ago. Many VCs remain unconvinced. But evolving regulations inviting larger transactions and welcoming non-accredited investors could require a second look.

Take Virtuix’s round, for instance. It is likely to include online and offline components from new and existing investors and, as a result, illustrate the expanding options for companies as they begin to jump through the new regulatory hoops.

Before long, campaigns could come to be seen as more than just low-cost money, but as a way to validate a company’s product strategy, business model and management team using the wisdom of the crowd.

“I definitely think it will be a big deal,” said Ryan Feit, CEO and co-founder of SeedInvest, a site planning to open itself to crowdfunding with non-accredited investors, known as Title III. “It effectively enables Kickstarter with equity.”

Of the new rules, perhaps the most dramatic is the door they’ve thrown open to non-accredited investors. Beginning in May companies that appeal today to the nation’s 317,000 angels will see that audience expand to millions of small scale, if perhaps inexperienced, investors.

Most observers expect non-accredited crowdfunding to start slowly. Regulations from the U.S. Securities and Exchange Commission are burdensome and expensive for small companies and restrictive to investors. Companies can only raise up to $1 million a year and smaller investors only invest several thousand dollars.

“From a pure capital raising perspective, I find it hard to believe people will flood to it,” said David Lynn, a partner at Morrison Foerster and a former chief counsel at the SEC. “I don’t think it will have any impact on traditional venture capital or angel capital.”

For that to happen, rule changes are needed, something Congress isn’t likely to take up this year. But supporters insist change will come and they say adjustments in their crosshairs include lifting the $1 million cap on companies to perhaps $5 million, limiting website liability, permitting test-the-waters campaigns as under Reg A+, allowing special purpose funds to group together investors into single entities and simplifying the financial statements requirements.

Another point of controversy is the demand that companies with more than 500 shareholders and assets greater than $25 million must comply with ongoing SEC reporting requirements, a dictate leading to higher costs.

“It needs to be fixed,” said Samuel S. Guzik, an attorney at Guzik & Associates and president of the Crowdfunding Professional Association. “It’s not crowdfunding that has been shown to work.”

This is keeping some online market places from jumping in. CircleUp Network, for instance, which recently raised a $30 million Series C with Union Square Ventures and Canaan Partners in the round, has no immediate plans to include Title III offerings.

“We have meaningful concerns non-accredited investors will face adverse selection” by attracting companies that can’t raise money elsewhere, said founder Ryan Caldbeck. On top of that, the requirement that they have to make their financials public is a significant deterrent, he added: “That one point, in our view, is unattractive enough on its own to steer companies away from Title III.”

Another site expressing caution is FundersClub, where more than 160 companies have raised money from a registered base of 16,000 accredited investors under innitial crowdfunding rules. The average funding on the site is $350,000.

But not everyone is sidelined. StartEngine Crowdfunding plans to launch a Title III platform with six to 15 companies on day one, according to CEO Ron Miller.

The fact that companies may now be able to validate not just a product, such as at a rewards crowdfunding like Kickstarter and Indiegogo, but validate a team and business plan will help take risk out of deals, Miller said.

“That is where I think the paradigm shift is coming,” he said. “I think what we will see is venture capitalists who cooperate with deals.”

Another site eager to take advantage of Title III is SeedInvest. So far, 60 companies have raised money on the site using crowdfunding and 15,000 accredited investors are registered. The average investment per person is $54,000.

Because non-accredited investors can participate in SeedInvest’s Reg A+ deals, the site already has experience with this group.

Indiegogo also views Title III is a possibility, said CEO Slava Rubin. “I believe someday we will have equity crowdfunding on Indiegogo,” he said. “We’re in research.”

If there is an indication of where Title III crowdfunding will have its greatest impact it could be as a replacement for informal friends and family rounds. Over time, companies also may begin carving out small pieces of offline deals to encourage company advocates from the crowd.

But so far the experience of the 29 states that have recently begun offering equity crowdfunding is the best guide. These states have approved just 102 of 118 offerings filed within their borders, according to the North American Securities Administrators Association, and the companies taking part are typically community-based, consumer-focused businesses such as bakeries, breweries, gyms, nightclubs and farms, said Anya Coverman, deputy director of policy at the NASAA. “It’s not really the tech community.”

The other big change to equity crowdfunding are the Reg A+ rules. Qualifying again is no easy task. The process is complex and, by some estimates, costs could add up to $225,000.

Tier 1 companies can raise up to $20 million with reviewed, instead of audited, financials and approval of the states in which they plan to approach investors. Tier 2 offerings can raise up to $50 million and are exempt from state approval. Companies must have audited financial statements and follow ongoing reporting requirements to the SEC.

Opinions differ on whether the requirements are going to limit the interest.

At FundersClub, Mittal said the company is still evaluating Reg A+. “We’re watching the landscape.”

StartEngine Crowdfunding is charging ahead. The site has seven companies listed, 31,000 registered users and 17,000 people who have pledged money. Non-accredited investors make up 80 percent of the total.

The site expects to add new registered users and investors as the number of issuers grow, Miller said.

It may be too early to say exactly how the equity crowdfunding landscape changes this year, but one thing is for sure, it will.