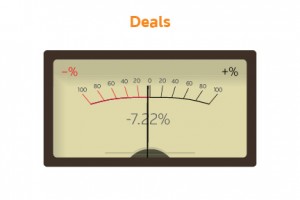 The value of deals in July fell more than 7% to $2.46 million, compared to the $2.64 million recorded in June. So far this year, venture firms have put almost $17 billion to work into portfolio companies while the average size of a deal in 2013 has been $3 million. Kleiner Perkins Caufield & Byers has been the most active venture firm with 69 deals to date. They are followed by 500 Startups and New Enterprise Associates with 63 and 60 deals, respectively.

From June to July, venture fundraising almost doubled from $584 million raised by 18 funds to more than $1.1 billion by 21 funds. Year-todate, 115 U.S.-based venture firms have raised about $9.5 billion. The largest fund to reach a final close this year was Battery Ventures X which closed on its target of $650 million in February. Similarly, Sequoia Capital closed on its 14th U.S. venture fund with $553 million and the oversubscribed third fund of Third Rock Ventures reached $516 million in capital commitments.

The number of VC-backed IPOs dropped slightly in July with six companies earning $568 million in proceeds, compared to nine known VC-backed IPOs in June raising $864 million. Year-to-date, 36 venture-backed companies have gone public, with total proceeds of more than $3.3 billion, while the average time for a portfolio company to reach an IPO is 8.6 years. In one of the largest IPOs this year, Tableau Software, raised $290 million in its May IPO. Tableau investors include Meritech Capital Partners and New Enterprise Associates.

Venture capital-backed companies have completed 238 M&A deals in 2013 for an aggregate rank value including net debt of about $13 billion for deals with disclosed financial terms. The largest trade sale of the year so far has been the acquisition of Pearl Therapeutics by AstraZeneca for $1.15 billion in June. The value of venture-backed M&As fell by 23% from 98 deals with $2.97 billion in rank value in June to the 37 trade sales reported in July with $2.29 in rank value.

Notes: Data is continuously updated and is therefore subject to change. Data based on U.S. venture firms.