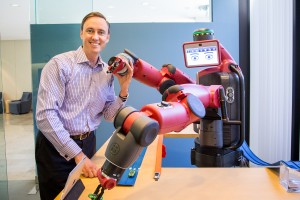 It’s been a busy month for me, professionally and personally. As I said to a friend who recently started a new job: “Busy is the new normal.”

With that in mind, and since I know our readers are the epitome of busy, let me summarize what I’ve done the last month.

Steve Jurvetson is still a really cool dude. And he’s extremely intelligent. I was privileged in May to go to Jurvetson’s beach front home in Half Moon Bay, California, to meet up with him and several partners of Draper Fisher Jurvetson. Don’t get too jealous. The number of journalists outnumbered the VCs.

We had wine and food (the chef made me a Ratatouille Tart to satisfy my vegan tastes). After sunset, the “Rocket Man” then fired off two of his handmade rockets, the fins of which he made using a 3D printer. The first rocket didn’t lift off and burned like a Fourth of July firework on the launching pad. The second whistled up into the air at Mach 1 speeds.

I wasn’t sure if that speed was accurate. But Jurvetson said so, and I had no reason not to believe him. The guy is super bright and can talk for hours about robotics, 3D printing, Mars colonization, space travel, Half Moon Bay and hundreds of other topics.

I need to pay more attention to politics. I covered local city council meetings in my early days as a beat reporter, but I’ve never been much of a political junkie. I vowed to change that after hearing Bruce Mehlman and David Castagnetti, partners at Washington, D.C-based Mehlman Vogel Castagnetti, address the attendees of the NVCA’s VentureScape.

Theirs was by far the most interesting presentation at the annual meeting for the National Venture Capital Association, as they talked about how the Republicans are certain to retain control of the House of Representatives, while the Senate is up for grabs.

How the next POTUS interacts with the venture community should be a major issue of the new administration of the NVCA, which must deal with a number of issues right now, such as diversity, H-1B visas and the impact of the public markets.

Oakland may be the next hot startup destination. At the beginning of May, I took part in the Vator Splash Oakland event in Oakland, where some 1,000 or so investors, entrepreneurs, politicians, entertainers and others gathered for the two-day event at Jack London Square.

Oakland was the big winner. The event was as much about VCs networking with their peers and looking at 15 startups vying in a pitch competition, as it was a promotional play for the city of Oakland. The city is gaining attention as a place for startups. It certainly has plenty of supporters, as there’s no denying there’s more space in the East Bay city than there is in San Francisco. And rents are more affordable, too, not to mention it’s closer to my East Bay home than San Francisco.

And if supporters get their way, the Oakland A’s baseball team will remain in town and relocate to a new ballpark at Jack London Square.

As Vator founder and CEO Bambi Francisco said: “Oakland is on the cusp of expansive growth.”

I wasn’t just at Vator to check things out. I had a great time moderating two panels.

The first included Jeff Clavier of SoftTech VC, Christine Herron of Intel Capital, Salil Deshpande of Bain Capital Ventures and Patrick Chung of New Enterprise Associates. The panelists are so quick-witted (many thanks to Herron for comparing dating to investing), and they had many wonderful things to say about FOMO, early-stage investing and the ins and outs of how they operate. I learned a lot.

The second panel I moderated was an equally engaging group of micro VCs: Marcus Ogawa of Quest Venture Partners, Erik Moore of Base VC, Jim Schienman of Maven and Jason Portnoy of Subtraction Capital. To say they are an up-and-coming group is misleading. They have already arrived, as they have plenty of exits and compelling investments under their belts. I learned plenty from these guys, as well, on their views of seed investing and how they are managing growth of their firms.

Thanks to all of the panelists for attending.

Have a good month, everyone. And if you see me around or want to meet up for coffee, I’m willing and available. No need to launch any rockets.