With three-quarters of the year completed, 2019 is shaping up to be the second-highest year ever for venture capital investing.

Although this year’s startup financing activity trails the record level of 2018, VCs have invested nearly $97 billion through the third quarter, which already tops the $85 billion invested during 2017, according to the latest report from PitchBook and the National Venture Capital Association. 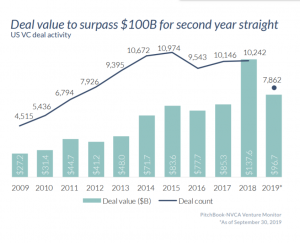 The growth in the number of large late-stage rounds is not a surprise. Companies are staying private for longer periods of time and use private capital to achieve scale. A median startup takes 7.6 years to reach an exit, according to the report.

While investing activity may be slowing down, this year’s total exit value is on a tear.

Through the end of Q3, VC-backed IPOs helped create more than $200 billion in exit value for venture capitalists, which is the highest level in more than a decade, according to PitchBook/NVCA.

The 67 VC-backed IPOs completed in 2019 account for 82 percent of the year’s total exit value. This year’s largest IPOs, Uber and Lyft, hit the public markets in the second quarter, but IPO activity in Q3 remained strong with the public debuts of such unicorns as Peloton Interactive, Cloudflare and 10X Genomics providing outsized liquidity events for investors. 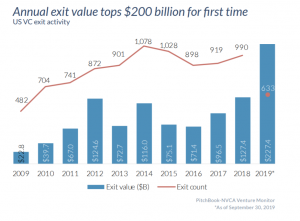