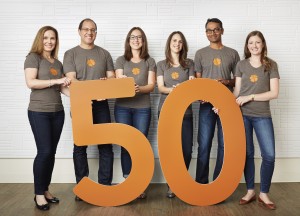 Felicis Ventures, a seed-stage investor that backed Angry Birds maker Rovio and recently acquired Dropcam, has raised $96 million for its fourth fund, its largest to date.

The Palo Alto, California-based firm raised just over $70 million for its previous fund, which was closed in 2012. Like its predecessor, the new fund was raised from undisclosed institutional LPs and three university endowments.

Renata Quintini, a general partner at Felicis, said the fund was oversubscribed and that the firm could have raised more than $100 million.

“The LP base is small and the sub-$100 million fund size helps to keep us aligned with our founders and their interest,” said Quintini, who’s joined on the GP side by Sundeep Peechu and Felicis founder Aydin Senkut.

No doubt, the firm’s fundraising drive was helped by the fact that Felicis said it has backed more than 120 companies since it was founded in 2006, mostly in seed-stage deals, 50 of which have exited. The list of portfolio company exits includes the recently acquired Dropcam, which Google agreed to buy for $555 million; Mashery, which Intel bought for $180 million; and Foodspotting, which OpenTable purchased last year for $10 million.

Felicis reported that the aggregate enterprise value of its portfolio company exits now exceeds $5.6 billion, three times more than what it was in 2012 at the close of their last fund.

“The majority of our deals are early-stage or seed-stage, but we don’t define ourselves by stage,” Peechu said. “We’ve tried to focus on backing companies that are reinventing core markets, such as security, mobile infrastructure and personalized medicine.

In mid-August, Felicis and Li Ka-shing’s Horizons Ventures co-led a $3 million seed-stage funding in Mark One, a San Francisco-based maker of the smart cup Vessyl. The connected device keeps track of nutrients and other qualities of what a consumer drinks out of the cup.