Susa Ventures unveiled a $50 million second seed-stage fund that at double the size of the first will enable the firm to increase its check size.

Susa Ventures II will continue the San Francisco firm’s investment thesis of backing enterprise SaaS companies with unique data sets or which employ machine learning. It plans to make 10 to 12 investments a year mainly in the United States.

Backers of the oversubscribed fund include Horsley Bridge Partners and Cendana Capital.

The fund is managed by General Partners Seth Berman, Chad Byers and Leo Polovets, who was one of the first engineers at LinkedIn and later worked at Google. The firm’s 2013 first fund has a portfolio of 41 companies, including Flexport, Robinhood and Periscope Data.

She told VCJ that the split from Susa was her decision and that it was amicable. She said she continues to be involved in Fund I.

Los Angeles-based Powerplant Ventures has raised $42 million for a fund that will focus on emerging plant-centric companies.

The Powerplant team includes Managing Partner Mark Rampolla, founder of ZICO Coconut Water, which was acquired by the Coca-Cola Company in 2013 for $200 million. He is joined by Kevin Boylan and T.K. Pillan, co-founders of the fast-casual restaurant chain Veggie Grill, and Dan Beldy, the former managing director of Steamboat Ventures, Disney’s venture arm.

Brooklyn Bridge Ventures has closed on a $15.1 million second seed fund, according to a blog post from General Partner Charlie O’Donnell.

O’Donnell said he attracted several new LPs and most of his existing LPs to the fund, which will write larger checks. Fund I raised $8.25 million.

The firm anticipates checks of $350,000 when it leads deals. compared with the roughly $200,000 its first fund could support.

The fund will continue to focus on New York companies that have yet to raise $750,000 in previous rounds.

Binary Capital has closed its latest fund at $175 million. The San Francisco-based consumer tech-focused venture firm raised $125 million for its debut fund in 2014.

The firm, led by Justin Caldbeck and Jonathan Teo, focuses on early-stage consumer tech and has backed gaming platform Unikrn, the artificial intelligence bot platform Assist and the moving services provider Bellhops, among others.

Bryant, who turned 38 in August, is partnering with 43-year-old entrepreneur and investor Jeff Stibel, the newspaper said. Their firm, Bryant Stibel, will be based in Los Angeles.

The two men are contributing the $100 million and are not seeking outside investors Together they have invested in 15 companies since 2013. After Bryant retired from the NBA this past season, they decided to formalize their relationship.

Santa Clara, California-based Vertical Venture Partners has closed its inaugural fund with $51.3 million in commitments, according to a regulatory document.

The filing indicates the money was raised from 32 investors. The firm was founded a couple of years ago by David Schwab, a former managing director with Sierra Ventures.

True Ventures closed on a $310 million fifth fund, according to a blog post on the firm’s site.

The 10-year-old firm now manages $1.3 billion in capital and has funded more than 220 companies, according to the post. True’s previous 2014 fund raised $290 million.

Correlation Ventures, which relies on predictive analytics to make investment decisions, has raised about $188 million for its second fund, according to a regulatory filing. The San Diego-based venture firm, which also has an office in Palo Alto, California, closed its previous fund at $165 million.

Sofinnova Ventures has raised $595.5 million for its 1oth fund, according to a regulatory filing.

The target was $650 million. The biopharmaceutical venture firm closed its ninth fund at a hard cap of $500 million in July 2014.

Earlybird Venture Capital, an investor in medtech companies EBS Technologies and Miracor, has raised an undisclosed amount of funding for its Germany-based healthtech fund.

The fund will invest primarily in medical technology across Europe.

The corporate VC was launched in 2014 with a $100 million pot to pursue early-stage fintech investments anywhere Santander has a presence.

At the time, Innoventures expected London to be a key market, but of the nine portfolio companies added so far, six are U.S.-based.

And while big data and online lending were the hot sectors in 2014, under the bank’s “Fintech 2.0” philosophy, Belinky is now also looking at artificial intelligence, machine learning and cognitive computing.

China has been encouraging its businesses to rise up the value chain through technical innovation and tougher efficiency standards, with the aim of creating globally competitive conglomerates. It has vowed to be more selective in the way it disburses funds, and aims to cut off credit for non-competitive companies that are unable to upgrade.

Australian bank Westpac has agreed to a second fintech fund from Sydney-based Reinventure, an independent venture firm that counts the bank as its sole LP.

Initial tickets will be in seed-stage and Series A, with follow-on funding up to Series B.

“We haven’t seen a material change in valuations in the market over the last year, aside from a few anomalies,” said Rohen Sood, an investment manager with Reinventure.

Within financial services, the new fund will target areas such as credit, security and data, while it will also invest in wider sectors such as agriculture, health and real estate if financial technology is embedded in the product. –Alex Derber

Australia has earmarked A$250 million ($193 million) of public money to support investment in its life sciences sector.

Capital from its new, for-profit Biomedical Translation Fund will be available to VCs that can drum up matching private investment for any deal, with investments likely to range from A$5 million to A$20 million ($4 million to $16 million) per company.

The focus will be on commercialisation of biomedical discoveries that have been developed to the late pre-clinical, clinical trial or post-proof of concept stage.

BTF was created in part to bridge a so-called ‘valley of death,” the gap between early- and late-stage research that Australian investors have traditionally shied away from.

General partners who avail themselves of BTF money must not be invested in other funds, and cannot invest more than one-fifth of their committed capital in a single company. –Alex Derber

The parent company has interests in agriculture, technology, telecoms, tourism and security, and the VC unit’s focus will largely be in those areas.

Net income for the group totaled R$200 million ($64 million) in 2015, though it is unclear whether the VC unit’s slice will be allocated on a rolling or one-off basis.

Algar Ventures will initially seek partnerships with startup incubators and accelerators, before moving into a more traditional venture investment role, either directly into companies or into other funds.

No minimum or maximum investment amounts have been set, and Algar has said it is prepared to invest from embryonic to mature stages of company development.

The goal, according to Clau Sganzerla, the group’s vice president of strategy, is to provide a bridge between disruptive startups and large corporations that desire innovation, but often have too little risk appetite to support it. –Alex Derber 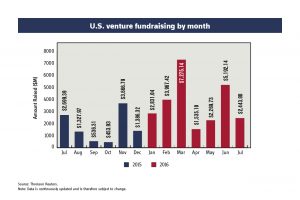