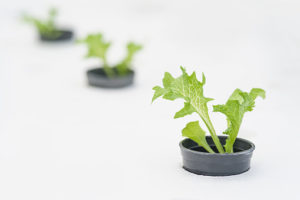 The British start-up has already secured about £3 million from high-net-worth individuals within its existing investor base, and is in the process of kicking off “a beauty parade around [venture capital firms],” Dring said.

“My expectation is we’ll close it out pretty soon,” he added.

Growing Underground was incorporated in 2012 and started trading in 2015. The company’s controlled environment farming operation is based 33 meters below street level in a disused part of the London Underground subway network.

Dring said the first £5 million tranche of the Series A will be drawn down in 2020, with access to the second £10 million tranche dependent on several milestones being hit, one of which is becoming EBITDA positive.

The co-founder said he expects the start-up to become EBITDA positive by the end of 2020, citing expansion plans. The firm has at least 0.5km of unused tunnel space to grow into at its existing site and a three-year agreement with an unnamed client to acquire all of the produce that results from the expansion.

Growing Underground grows micro green herbs such as rocket, pea shoots and radish using hydroponic systems and LED lights, without that use of any soil.

The fresh produce business is also using its knowledge in hydroponic technology and data to launch a series of special purpose vehicles with clients and growers.

Dring said the company has nine such proposals out with clients, six of which are at “advanced proposal” stage. The SPVs are expected to lead to new farms that will use Growing Underground’s approach to hydroponic farming, which will receive financing from the prospective clients and growers.

The exact financing arrangements for the new ventures were not disclosed.