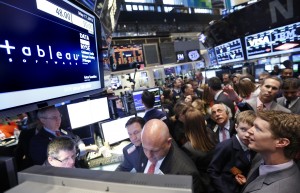 It’s been a fine year for venture-backed IPOs. Now, it’s time for follow-on offerings to take the spotlight.

Over the past few weeks, secondary filing activity has picked up among recently public Internet, software and life science companies. Several are seeking to bring in sums well in excess of what they raised in their IPOs.

The largest newcomer to the list is Tableau Software, which raised $250 million in its May IPO, and in October brought in close to $500 million through a follow-on offering. Proceeds from the sale went to Tableau shareholders, with most of it going to New Enterprise Associates, the company’s largest stakeholder.

A day after Tableau’s filing, Yelp filed for another large follow-on offering expected to bring in about $240 million, which the company plans to use for working capital and potential acquisitions. The filing comes in the wake of a much larger follow-on by LinkedIn, which sold about $1.35 billion worth of shares in a September offering.

Overall, at least eight venture-backed companies have filed for, or carried out, follow-on offerings valued at $150 million or more since August. In the following table, we look at the largest follow-on offerings, with a particular focus on how venture backers are generating returns from these share sales.