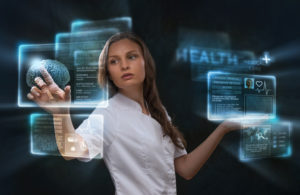 AI is already an essential part of online recommendation systems, such as Netflix and Amazon, and while still in its infancy, AI is also slowly beginning to help doctors make medical decisions.

Healthcare AI startups are getting funded at an unprecedented pace. These companies have raised $5.8 billion across hundreds of deals since the beginning of 2018, surpassing all other industries using AI, according to a report by CB insights.

In Q3 of this year, startups in this area raised $1.6 billion in venture funding, which CB Insights reported is the highest quarter on record.

Solving all the problems

Despite all the funding, AI’s role in medicine remains minor.

“There was a time when people thought AI is going to solve all our problems,” says Greg Yap, a partner with Menlo Ventures. “Every company in healthcare is trying to work the magic of AI into their pitches, but the number of companies for whom AI is a differentiated technology is very small.”

While many drug development startups and big pharma are using AI to facilitate drug discovery, they may be many years away from bringing those drugs to market. As of now, imaging and diagnostics is the only area that is getting close to deploying AI-driven products in a live medical setting. Not surprisingly, there has been a surge of deals in this sub-sector.

“One thing you need for AI and machine learning to work well is a tremendous amount of data,” says Kevin Spain, a general partner at Emergence Capital.

Currently, AI is much better at reading and interpreting structured data, meaning anything that is labeled. Since annotated medical images are more accessible than for instance electronic medical records, processing medical images is one area where machine learning can be applied most readily.

“Image recognition is one of the most sophisticated areas when it comes to machine learning and AI,” Spain says. “The technology is ready and there is plenty of data to train the algorithms.”

The promise of AI in imaging of CT scans, MRIs, or X-rays, is that it can help radiologists expedite readings and improve accuracy.

While providing results to patients faster and reducing incorrect diagnosis may not seem like a revolutionary change, these advancements could be very valuable.

“If this technology is reducing error rate by 10, 20, 30 percent. That’s a major improvement. It can actually save lives,” Spain says.

Viz.ai, a startup that uses AI to identify stroke indicators on a CT scan, is one such company. Viz.ai’s offering can help save lives not only by making a quick reading, but also by alerting neurological specialists within minutes about a potential need for emergency surgery. In addition to improving patient outcomes, the company’s technology provides cost savings to insurers.

The startup’s AI-driven software received FDA approval last year, which led to its adoption at 300 hospitals. Viz.ai plans to use the $50 million Series B round it received in the fall from Greenoaks Capital, Kleiner Perkins and GV to expand into “other disease states” and geographies.

Other notable companies within AI-enabled imaging space include Arterys, a startup that recently received FDA clearance to use its deep learning AI tools to assist radiologists with spotting liver and lung cancer; AiDoc, which says its AI-software helps detect anomalies on medical scans and instantly compare them to previous images, and Zebra Medical Imaging, a startup applying machine learning to X-ray images.

In 2018, IDx, an 8VC-backed startup, was granted an FDA approval for an AI-powered software that detects eye disease associated with diabetes by looking at retina images. While the clearance is for a relatively rare ailment, this is the first instance where the FDA allows AI to make a diagnose without doctors’ involvement.

Pathology is another medical area where AI-powered image software can make a difference.

PathAI, a startup that raised a total of $90 million, uses AI to digitize and analyze pathology images. The company hopes to assist pathologists in making more rapid and accurate diagnoses. Although the company’s technology is a year or two away from being applied in a clinical setting, PathAI’s tools are already being used by pharmaceutical companies for the development of personalized drugs.

Eko found that its algorithm can detect heart murmurs in children as correctly as a pediatric cardiologist. The company is expecting to receive an FDA clearance for this algorithm within about a year, Bailey says. This means that nurses and a broader set of physicians will be allowed to screen patients. The device is now used in a pilot program with over 10,000 physicians, but mass usage may be a while away, Bailey says.

Diagnostics using imaging is certainly the “lowest hanging fruit” of AI in healthcare, according to George Ugras, a partner at AV8 Ventures.

“We are seeing some early adopters, but we still have not seen exactly how scalable and sustainable the economics for these technologies are,” he says. “For AI to be adopted widely, it needs to work for all constituents—insurers, doctors, and patients.”

As for exists, this space is new, but in August, RadNet, a network of outpatient imaging centers, acquired Nulogix, a developer of AI algorithms, and created a new division focused on AI solutions in radiology.

But another promising application of AI in diagnostics is using blood work for tumor detection. Startups like Freenome and Grail are using machine learning to find patterns in cell-free biomarkers circulating in the blood that could be associated with cancer.

While these blood-based tests are still in development, they are showing promising results. “Freenome has plans to have something substantial in two years,” says Bailey, who is an investor in the company.

These companies have received hundreds of millions of dollars in funding and have the potential for a significant exit even without being used in humans, Bailey adds. He offers an example of Guardant Health, which while still working on developing a blood-based cancer detection test, had a successful public offering last year.

Grail and Freenome are getting a lot of attention in part because unlike Guardant Health, they are using AI. But whether machine learning and AI will help these companies develop a liquid cancer test faster remains to be seen.

“We made small strives in using data in ways that are definitely measurable and tangible,” says Bailey about AI’s overall role in medicine. “But I can’t think of a single healthcare AI company that is already being adopted widely or at scale.”