Biotech IPOs continue to dominate the VC-backed IPO landscape through the first five months of 2016.

But Maynard, Massachusetts-based Acacia Communications Inc became the first venture-backed tech IPO to debut this year, when it went out in May, according to a VCJ analysis of the market. (Dell Inc‘s Atlanta-based SecureWorks was the stock market’s first overall tech IPO this year when it debuted in April.)

Twilio, which has been in registration, is on deck for an IPO this week. And Reuters reported that AppDynamics is pushing ahead with its IPO plans.

Despite the small number of tech companies joining the IPO parade, biotech and life science companies represent the bulk of new offerings.

Through the end of May, there have been 13 venture-backed companies that went public, including six in May. All but one of the 13 are biotech or life sciences companies. The solo tech offering was Acacia, a developer of optical components. The company had previously raised $20 million in funding from Commonwealth Capital Ventures, Matrix Partners and Summit Partners, among others, according to data from Thomson Reuters.

Acacia raised $100 million in its IPO, and it ranks as one of the top-performing VC-backed IPOs in the aftermarket. The stock debuted at $23 a share on May 13 and was trading above $39 at the end of May, a 71 percent gain. The stock was still trading above $38 a share, as of June 21.

The genome company Editas Medicine remains a standout in the aftermarket. The stock was trading at more than $37 a share at the end of May, a 132 percent increase from its $16 offering price when it launched an IPO on Feb. 3.

The lowest performing new company was Aeglea BioTherapeutics Inc, a developer of pharmaceuticals to treat tumors. It raised $50 million in its debut on April 7, but its stock was trading 25 percent below its debut, as of May 31. 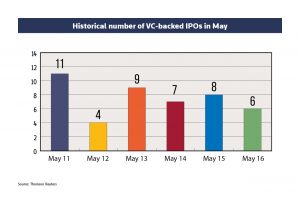 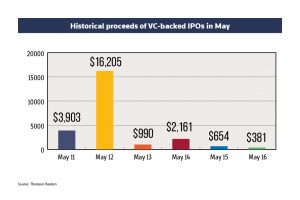 Downloadable Data: VC-backed IPO aftermarket, as of May 31, 2016

Photo of a screen displaying the Dow Jones Industrial Average after the close of trading on the floor of the NYSE in New York, May 25, 2016. Reuters/Brendan McDermid