If it wasn’t for biotech, there would be no VC-backed IPOs through the first four months of 2016.

Through the end of April, there were seven venture-backed companies that went public, including just one in April. All seven were biotech companies. The solo offering of the month was Aeglea BioTherapeutics Inc, a developer of pharmaceuticals to treat tumors, which raised $50 million in its debut.

However, there may be a change coming, but perhaps not until later this year. Reuters reported in mid-May that VC-backed QuantenNA Communications Inc, a Fremont, California-based designer of Wi-Fi chips used in set-top boxes and wireless routers, has hired investment banks for an IPO that could come later this year, people familiar with the matter said.

QuantenNA is aiming to file an IPO prospectus for a $300 million offering during Q3, at the earliest, people familiar with the matter told Reuters.

The company, founded in 2006, had raised $168 million in funding from VCs, including DAG Ventures, Sigma Partners, Sequoia Capital and Venrock, among others, according to Thomson Reuters.

Until the semiconductor company follows, it’s a biotech show. And the biotech IPO parade is certain to continue.

What awaits them is a market that is not entirely receptive to the new biotech stocks. Of the seven VC-backed biotech companies that have launched IPOs this year, two are seeing their stocks trade below their offering prices, as of April 30. There’s only one standout, the genome company Editas Medicine, whose stock was trading at $33.05 at the end of April, a 107 percent increase from its $16 offering price when it launched an IPO on Feb. 3.

Reuters contributed to this report. 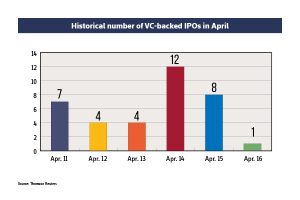 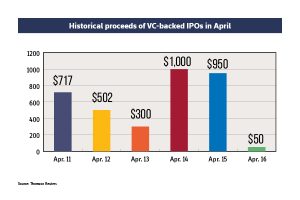 Photo of a “Wall St” sign courtesy of Reuters/Lucas Jackson