The market for venture-backed IPOs came to a standstill in January as zero companies debuted on U.S. exchanges.

It was the first time since September 2011 when no VC-backed companies launched public offerings, according to a VCJ analysis of Thomson Reuters data

It wasn’t that long ago when IPOs were a hot thing. In 2014, a record 188 VC-backed companies went public on the NYSE or Nasdaq exchanges. Last year took a bit of a dip, but still saw 72 venture-backed companies go public, according to VCJ.

Despite the slow start in January, some believe the market will pick up even if some observers are discouraged by a declining U.S. market. For instance, VC-backed online storage startup Nutanix filed for an IPO in late December. Nutanix, which builds server and storage systems for companies, was valued at $2 billion at its last private financing round in August 2014. The San Jose, Calif.-based company, which was the rumor of a Cisco Systems acquisition, raised more than $312 million from investors, including Lightspeed Venture Partners and Khosla Ventures, among others.

Other tech companies that may consider an IPO this year include a bevy of unicorns, such as Airbnb, Dropbox, InsideSales.com and MuleSoft. None of them appear to be solid bets at the moment.

If the VC-backed IPO market sees any relief this year, it will come from the life sciences sector. In 2015, 53 of the 72 VC-backed IPOs, or nearly 75 percent, were in biotech, medical or healthcare-related fields, according to a VCJ analysis. This included drug developer Aclaris Therapeutics, which went out in October, but was up 102 percent from its debut price at the end of January (see IPO Aftermarket  table for more info). 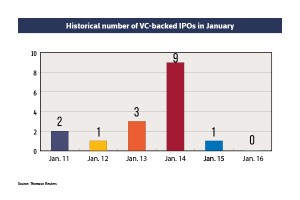 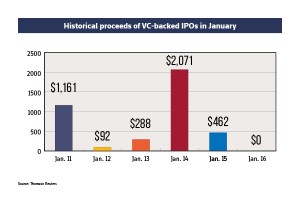