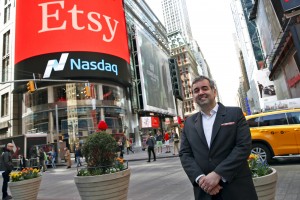 Although life sciences and healthcare companies continue to dominate the landscape of venture-backed IPOs, marketplaces are making a splash.

The top VC-backed offering from April was Etsy Corp, the Brooklyn, N.Y.-based ecommerce website that specializes in handmade and vintage items. In late May, Shopify, a Toronto-based ecommerce platform provider, also went IPO.

Other Canadian startup entrepreneurs and their venture backers, many of which are from the United States, will be watching how Shopify performs once trading begins. A solid debut by Shopify could pave the way for Canadian, VC-backed tech companies to join the IPO parade, including Vancouver-based Hootsuite Media Inc; Vancouver-based Vision Critical (which is mostly backed by Canadian VCs); and Toronto-based Wattpad; and Vancouver-based BuildDirect, among others.

For now, though, life sciences remain the story for new VC-backed IPOs.

In April, the five of the eight venture-backed IPOs that debuted were all life science companies, according to a VCJ analysis of the IPO market, with a total value of nearly at $950 million.

Through the first four months of the year, 17 of the 23 VC-backed offerings were life sciences, representing 74 percent of total listings so far this year. It’s a remarkable trend, considering the dearth of life sciences in the public markets in the early part of this decade.

The pace of over new offerings is well off of last year’s record setting barage of IPOs. Through April 2014, 53 VC-backed companies went IPO, raising more than $4.8 billion in proceeds. Most observers of the industry say that the pace of public offerings can still pick up in 2015, thanks to a bountiful supply of early-stage startups.

However, several factors could upset the IPO apple cart. High private company valuations for tech companies are already impacting M&A, where some acquirers have backed away from transactions.

If the disconnect between high private-market valuations for tech companies and their lower public-market valuations continues, the market could see a rise in secondary trading activity and a corresponding decline in IPOs.