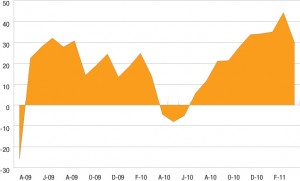 It had all the signs of another dot-com bubble: A startup without a convincing business plan or any foreseeable chance of turning a profit saw its shares soar in the first hours after its stock market debut.

The difference this time—one that cost some investors money but provided a measure of relief to anyone worried about an overheated IPO market—is that shares of Pandora Media Inc. quickly went south.

Two days after Pandora’s stock debuted in June, it had handed back all its gains and was down nearly 20% from its IPO price of $16.

While Pandora raised $235 million in its offering, any of the investors that bought shares at the IPO price or higher are now suffering losses—a tough lesson in jumping into the dicey IPO market.

And Silicon Valley seems just fine with that. Not due to Schadenfreude within the venture capital and startup worlds, although surely some of that exists, but rather because it demonstrated sanity in the markets.

“Pandora showed that if you’re still trying to figure out your business model and you go public, then the market is going to call you out on it,” says Bruce Taragin, managing director of Blumberg Capital. “I’m pleased there’s no irrational fervor in the marketplace.”

Pandora, an online music service, is not alone. Its rise and fall just happened at a stunning speed.

For example, shares of LinkedIn Corp. and China’s Renren Inc., two VC-backed social networks that debuted on the public markets in May, also reversed course after strong debuts. It just took them a bit longer. LinkedIn (which raised more than $350 million in its IPO) is still hovering above its IPO price but is down some 45% from its highs, while Renren (which held a $743 million IPO) has lost half of its value since its IPO.

Josef Schuster, founder of Chicago-based IPO research and investment house IPOX Schuster LLC, said the pullback from Pandora and others is “a healing process” that should help the technology IPO market in the months to come.

The road ahead looks quite crowded for technology startups that want to go public. But for now it may be too early for judgment since only a clutch have made their public debut.

“Right now it’s just a handful of companies,” says Eric Hippeau, a partner at Lerer Ventures. “It’s not the best way to indicate where the market is going.”

That should change in the coming months. Groupon has filed for an IPO, while Zynga Game Network and Twitter could also announce IPO plans. Facebook would be the most anticipated, considering it has more than 500 million users worldwide and this year could produce what one researcher estimated would be $4 billion in ad revenue.

Pandora showed that if you’re still trying to figure out your business model and you go public, then the market is going to call you out on it. I’m pleased there’s no irrational fervor in the marketplace.

However, the trouble with Groupon and many others lining up for IPOs is that they aren’t turning a profit. Groupon posted an operating loss of $117 million in the first three months of the year. In its IPO filing, CEO Andrew Mason said the company does not value itself in a conventional manner and suggests other ways of looking at how much Groupon is worth.

Pandora, for its part, has never turned an annual profit.

“What we thought before when you couldn’t do an IPO is still true: If you are losing money, don’t go public,” says Todd Dagres, general partner at Spark Capital.

The question is whether Pandora will serve as a cautionary tale for super-hyped startups and those investors willing to overlook doubtful business plans to get a piece of the action.

“Everybody wants to invest in Facebook but they can’t,” said Dagres, citing a “halo effect” surrounding social and new media startups. “Other companies are riding that wave that are not leaders in the category and don’t have long-term advantages. The reason is because there is a premium for growth.”

Perhaps the rush to sell shares to the public and raise money is sensible, considering how much uncertainty surrounds the housing markets, employment and fears about debt troubles at home and abroad.

“Now is a great time to raise money, a lot of times smart entrepreneurs are raising perhaps a little bit more than they think they need because they recognize that it may not last forever,” says Paul Buchheit, a partner at startup accelerator Y Combinator and a former Googleengineer.

“I’m not worried about a tech bubble. I’m worried that the entire economy may be a bubble,” he added.

Others, of course, say the IPO market is on solid footing and that much of what happened with Pandora is a pricing issue that will be sorted out with public offerings over the coming three to six months.

“I don’t feel we’re in a bubble, I feel that strongly,” says Sandy Miller, general partner at Institutional Venture Partners, an investor in Twitter and Zynga. “We’re in the early stages of an IPO market, which I think will be sustainable for some period of time.”