IPO enthusiasm is higher than it has been in some time. Nine successful venture-backed tech deals this summer and fall from such companies as Twilio, Nutanix and Coupa Software have given new hope to investors after the torpor of the first half.

But excitement aside, the U.S. IPO market could remain a selective, low volume place for some time. And a big unicorn deal or two may not create the stampede some expect, if history is a guide. Neither Facebook nor Google did.

There is no question September, October and the late summer provided welcome relief for an IPO starved venture industry. The performance of top deals, including the unicorns mentioned above, prove an encouraging sign for 2017.

“The seminal moment this year was the IPO of Twilio,” said Ajay Chopra, a general partner at Trinity Ventures. “The window is definitely open. It opened all of a sudden.”

Following Twilio came Impinj, Airgain, Trade Desk, Apptio, and of course Nutanix and Coupa, setting a new direction for a year that through early November produced the fewest deals and the smallest amount raised since 2009. The Japanese company Line also sold shares in a sizeable offering of $1.14 billion.

Aftermarket performance has been strong. Twilio was up 109 percent over its IPO price as of mid-November, while Nutanix held a 76 percent gain above its debut price and Airgain had advanced 143 percent.

The success was due in part to market dynamics, not simply company quality. Pent-up investor demand swarmed a relatively small number of modest-sized, attractively priced offerings, giving them a boost.

The average size of an IPO this year is just $89.1 million, compared with $121.4 million last year and $132.7 million in 2014. And while the Nutanix deal was larger, at $238 million, the average size of this summer’s and fall’s tech deals, excluding Nutanix and Line, was just slightly more than $100 million.

For many of these companies, price-to-sales ratios still remain attractive. The average among the 10 companies, including Acacia Communications, which had an IPO in May, is 7.4x, suggesting the stocks still have room to climb. Workday’s, by comparison, is close to 12x.

VCs widely believe 2017 will be a better year than 2016. Some even expect it to top 2015. Bankers, too, believe it is on the verge of a revival and are more actively pursuing companies.

“I do think there is reason to be enthusiastic,” said Ethan Kurzweil, a partner at Bessemer Venture Partners. “There are some idiosyncratic companies waiting to go public. That will lift the overall market.”

The belief is if they get the pricing right and the deals perform well the window will open wider for more companies to follow. This may be the case.

After a tumultuous start to the year, public market turbulence has decreased with the VIX (volatility index) remaining largely under 20 since the June Brexit vote. This is good for new offerings.

At the same time, market indexes have recovered and reached new all-time highs, with SaaS and cloud companies making big gains off their lows. Confidence is better.

Companies, for their part, seem better prepared, with a greater focus on sustainable growth and achieving a positive cash flow. New attention is being paid to gross margin and keeping operating expenses under control.

This has gone hand in hand with the beginnings of a correction in expansion stage valuations.

“There is a healthy pipeline,” Chopra said. A substantial amount of venture money went over the past several years to build companies. “It’s really the pipeline that determines the momentum.”

Public markets also have eased up on what they expect. Public market investors, who last year began demanding a clearer path to profitability over pure growth, seem to be swinging back a bit toward buying growth. Risk has returned.

All this has led to better aftermarket performance, with technology the year’s best performing IPO sector.

With the JOBS Act giving companies more flexibility to test the waters and filing confidentially, the path to the public markets is a bit easier.

Looking ahead, more unicorns could find the market ripe for an offering.

For one, the public markets might be the only option for some of the largest unicorns. Few corporate buyers can pay the $50 billion to $60 billion it would take to own one.

At the same time, with crossovers less active, there is less opportunity for big pricey rounds in the private market. The number of $100 million plus rounds has fallen almost in half so far this year, according to Thomson Reuters.

Crossovers will continue to support the best companies, but “you won’t see the rampant check writing you saw driving the tech private IPO boom” of the past couple years, said Steve Allan, head of SVB analytics at Silicon Valley Bank.

Yet expectations may be getting ahead of reality. The IPO market has structurally changed on several fronts in the past decade and a half, and deal volume is one of them.

For a start, companies have to be bigger. The $50 million IPO with a $200 market cap doesn’t exist anymore, said Jim Feuille, a partner at Crosslink Capital. Today, deals more commonly raise $80 million or $100 million.

“That’s going to eliminate the numbers,” Feuille said. Only a firm’s biggest companies will be public. The rest are going to be acquired.

If companies can point to good sales force productivity, and tell a good unit economics story, public market investors will be interested. If the volume of companies is measured and quality is high, deals will get the appropriate amount of attention, he added. “If it gets crowded and there’s a lot of deals, it could get tougher.”

The new reality also is a longer road to IPO than in the past, offered Dayna Grayson, a partner at New Enterprise Associates. “The new normalcy is that the average time to IPO has been extended.”

The average time to exit for a venture-backed IPO this year on the Nasdaq and NYSE is 7.3 years, a number that has risen steadily from an average of 3 years in 1999. The peak over the period was 8.1 years in 2013, according to data from Thomson Reuters.

“There is just going to be a smaller number,” Grayson said.

As a result, voracious demand for a wave of deals doesn’t appear likely today. Standout unicorns such as Airbnb, Snapchat, Uber and to a lesser degree Dropbox may find demand for a large individual offering. But a slipstream bringing along a trail of smaller companies is hard to imagine.

Just look at the Facebook IPO in May 2012. In the three following quarters, the number of companies with public offerings fell. And the number of deals rose only slightly in the quarter following Google’s August 2004 IPO, but fell in the subsequent two quarters.

Not everyone is sold on a big unicorn deal.

The companies going out next year aren’t likely to be the big unicorns, but smaller ones, said Timothy Harris, a partner at Morrison & Foerster. They will want to create paths for employee liquidity and to benefit from the publicity they get from going out.

“You have to say the IPO market is looking better,” he said.

But if this is not the top of the cycle then it is close in terms of valuations, and “this means that some private companies have likely outgrown the IPO market,” he said. “These companies, I suspect, will remain private companies for a long, long time.” 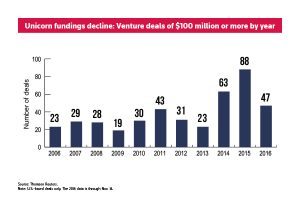 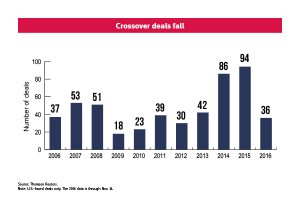 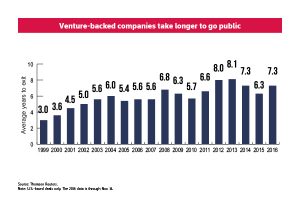 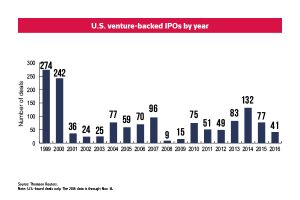