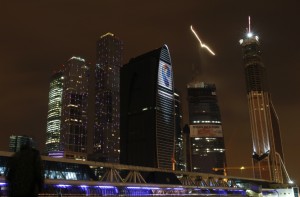 It was more than a year-and-a-half ago and the Russian president was hosting a group of Western venture capitalists. Medvedev was lamenting how most investors were only interested in putting money into the nation’s oil and gas economy. Medvedev saw that as a real problem. He understood that the future of Russia depended not on its diminishing natural resources, but rather on the rise of its burgeoning tech sector.

Fast forward to today and it’s a completely different story.

“Now it almost seems like everyone and their mother has a venture capital firm in Russia,” says Loukianoff, an American co-founder of Moscow-based Almaz Capital Partners, which focuses on the Russian market.

Everyone from Russian oligarchs to the Russian government is pouring money into the market. Serious money.

The Russian government has committed billions to jumpstarting the tech sector and creating a local version of Silicon Valley.

“One of my biggest concerns today is that the tech market in Russia has become too frothy,” Loukianoff says.

What’s happened is that in the last 18 months, Russia has had two monsters IPOs. At the end of 2010, Mail.ru, Russia’s largest internet portal and online gaming platform, went public on the London Stock Exchange. It now boasts a market cap of $8.3 billion. Six months later, Yandex went public and became one of the biggest Internet IPOs since Google. Yandex, the runaway leader in Russia’s online search market, is listed on Nasdaq and now has a market cap of $8.5 billion.

“The success of companies like Yandex and Mail.ru showed there is money to be made in the Russian technology sector,” says Brian Feinstein, who focuses on the Russian market for Bessemer Venture Partners. “A few years ago, I’m not sure you would have seen any early stage VCs who were focused on U.S.-style venture investing. But over the past six months to a year, there have been a number of local venture firms that raised $50 million, $100 million, $200 million funds at a pace we’ve never seen before.”

Eighteen months ago, there were only a handful of funds actively investing, confirms a representative of the Russian government. Today, there are 112 funds and 90 professional management companies in Russia. All told, venture funds invested $500 million in several hundred Russian startups in 2011, the representative says.

It’s not just rich Russians who are discovering the local venture capital market. It’s the rest of the world, too. In search of the next big growth market, a number of U.S. and Western European venture firms have set their sights on the Russian market.

The potential rewards are definitely huge, but so are the risks. Bureaucratic red-tape, corruption, and dubious legal safeguards are notorious hallmarks of Russian business. But the country also has an endless supply of first-rate technologists coupled with a growing spirit of entrepreneurship. It also has the largest Internet population in Europe with 55 million online users and growing.

The question is whether the positive factors are enough to convince investors that the opportunities outweigh the risks.

“Some foreign investors are still wary of Russia because they see this top layer of bad stuff,” says Loukianoff, referring to fears of corruption. He notes that corruption mostly affects large enterprises that are tied to the government or to natural resources.

“[For startups], nobody really pays attention because there is not a lot of money at stake, so we don’t attract those unsavory elements,” he says.

If anything, the Russian government is determined to give free money to tech startups, not take it away. In 2010, Russia created the Skolkovo Foundation backed by billions of dollars in oil and gas money. The foundation’s ultimate goal is to create a Silicon Valley-style tech hub complete with state-of-the-art research centers, a post-graduate university, and office parks packed with early stage startups.

To further foster the entrepreneurial mindset, Skolkovo is handing out startup grants like candy. These grants could total up to $5 million per startup in no strings-attached seed funding, with the government asking for absolutely no ownership in return. In just over a year in operation, the foundation has already provided $200 million in grants to 400 startups, a funding pace of at least one startup every day.

“Are they all going to be the next Google? No,” Skolkovo’s COO Steve Geiger recently told the San Jose Mercury News. “But you’ve got to kick-start things and create buzz and some optimism.”

Bessemer Venture Partners, eager to gain access to well-funded startups with undiluted ownership, recently agreed to set aside $20 million for investments in Skolkovo resident companies over the next two years. Bessemer will receive priority access to the foundation’s project pipeline, with the ability to invest in the most promising startups. The firm can even refer its existing portfolio companies to receive Skolkovo support, as long as those startups agree to move some of their engineering and research to Russia.

Skolkovo has also created two multi-billion-dollar fund-of-funds to act as limited partners for both foreign and domestic venture firms. One of those fund-of-funds is called the Russian Venture Co. (RVC), which is now actively recruiting top-tier, U.S.-based venture firms that have expressed a desire to invest in Russia.

“My ultimate goal is for the Bessemers, Greylocks and DCMs of the world to get the same appetite for Russia as they have for China,” says Axel Tillmann, who heads up the RVC from its Boston headquarters. “Yes, Russia still has red tape and we are still converting to a modern society, so it’s about risk management and learning what can be done. If you can overcome these hurdles in China, you can do it in Russia as well.”

In fact, Luxembourg-based Mangrove Capital Partners made a strategic decision six years ago to enter the market rather than go to China or India.

“Back then every VC was thinking about India or China,” says Mangrove Partner David Waroquier. “But we had this major country right next door to us in Europe that nobody was thinking about, but which was much closer to us culturally. Since then, we have become very serious about Russia.”

To date, the firm has made six investments in the country, including KupiVip.ru, Oktogo.ru, online search engine Quintura, and social and mobile gaming startup Drimmi.

Feinstein of Bessemer is convinced the Russia is the next China. Just as VCs made a killing by investing in China clones, such as “the Facebook of China,” “the Amazon of China” and “the Groupon of China,” those same opportunities now exist in Russia.

“What’s most impressive is the sheer scale of the Russian domestic market,” says Feinstein, who notes that because of a low, flat tax rate, Russians tend to have very large disposal incomes, and they like to spend their money. “You have these great market condition and lots of wide open spaces, which makes this a very attractive time to back entrepreneurs. There is massive amount of upside for Internet businesses focused on the domestic Russian market.”

Feinstein says Bessemer is looking at Russian teams dedicated to building consumer Internet businesses in areas ranging from travel to gaming to classifieds, to pretty much any large, proven online sector.

But some VCs, like Alexandra Johnson, managing director of DFJ-VTB Aurora, a new $100 million Russia-focused fund co-managed by Draper Fisher Jurvetson and VTB, a large Russian bank, are not a big fan of this strategy.

Instead of investing in these “unoriginal” business models, her firm would rather leverage the country’s world-class engineers who are attempting to solve much bigger problems in such areas as big data, machine learning and material sciences.

The challenges with Russia’s nascent venture ecosystem are still plentiful. While the country may be teeming with brilliant scientists and engineers, it is lacking a managerial class that is needed to help build new companies. There is a distinct dearth of talent around marketing, sales and commercialization. And if you are lucky enough to find these skilled managers, they are unlikely to join an unheralded startup. That’s because there is no such thing as employee stock options in Russia.

“We would love to invest in more Russian startups, but how do you incentivize the team?” asks DFJ-VTB Aurora’s Johnson. “If the Russian government does not want these companies to leave the country, it should reform the legislative environment to make the ecosystem more startup friendly.”

Still, she notes the progress in the Russian market.

“When we first showed up, it was really hard to find what we call startups,” explains Johnson, herself a Russian native who now resides in the United States. “There were lots of scientists running around with brilliant ideas, but no structure around them. Over the last year or two, we’ve seen the entrepreneurial community grow rapidly. There is sense that it’s cool to make money domestically.”

This thought is echoed by Esther Dyson, a Silicon Valley luminary who also happens to be one of the earliest and most prolific angel investor in Russian startups. VCJ caught up with her the day after she returned from her most recent trip to Moscow.

“Every time I go, there is a new startup event or a women entrepreneur summit or an ecommerce get-together,” she says. “It is non-stop.”

To date, Dyson has invested in more than a dozen Russian startups including Yandex, ParaGraph and Ostrovok. Her most recent investment is Zingaya, a Skolkovo-backed company that enables voice calls through any computer from a webpage, without any software downloads required.

What it all adds up to is that if investors can get in early and make their mark in Russia, they will ride the wave all the way up, says RVC’s Axel Tillmann.

Perhaps, but there are still a number of unanswered questions that are giving even the most bullish VCs some pause.

“We have to ask ourselves whether there is a sufficient volume of really interesting investment opportunities in Russia to merit the influx of capital,” says Bessemer’s Feinstein. “And frankly, that’s impossible to know right now.”