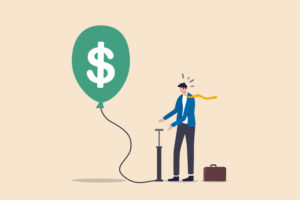 After seven consecutive quarters of gains, valuations for early-stage US companies finally fell back down to earth in the second quarter. However, the reality check for start-ups has yet to impact the value of companies that are much further along in their development.

Those are two of the big takeaways from the Q2 US VC Valuations Report published by PitchBook Thursday. It is the first hard data about company valuations to be reported, following multiple anecdotal reports of declining private-company valuations in tandem with sharp drops in the public markets.

At the early stage (Series A and B deals), the median pre-money valuation was $52 million in Q2, down from a record high of $62 million in Q1, PitchBook reported. The second-quarter decline marked the first time the median early-stage pre-money valuation has come down since Q4 2019, when it was $25 million. Valuations had previously increased for seven consecutive quarters.

Valuations for seed-stage companies remained relatively high, with a median pre-money valuation of $12.2 million in Q2. Double-digit valuations at the earliest stage of company formation is a recent phenomenon. With just one exception, the median seed valuation stayed in a band of $6 million to $7 million from the third quarter of 2017 to the third quarter of 2020. From then, it increased every quarter, going from $8 million in Q1 2021 to $12 million in Q1 of this year.

“Seed-stage investment has possibly held up better than any other stage to this point in the economic slowdown,” PitchBook said in its report. “Seed deal counts have remained elevated, and median deal sizes and valuations continue to grow.”

PitchBook attributes the higher valuations for seed-stage companies to the “continued presence of large, multi-stage firms and nontraditional investors in the seed stage, alongside a growing number of micro-funds (637 closed in the last 18 months) that continue to drive competition in the market.”

In what may be the most surprising revelation of PitchBook’s report, the median pre-money valuation for late-stage deals actually increased from the first to the second quarter, from $105 million to $110 million. It was an odd development, given that at least two high-profile late-stage companies have seen their valuations sharply reduced in recent weeks. Stripe’s valuation fell by 28 percent, while Klarna’s plummeted by 85 percent, according to press reports.

A decline in late-stage valuations for certain companies is also being seen in the secondary market, where shares get traded for popular companies such as defense tech company Anduril, gaming chat company Discord and fintech company Plaid.

“Setter saw a material drop in pricing this quarter with top bids falling 17 percent in Q2 of 2022 and 23 percent YTD,” secondary firm Setter Capital said this week in a report about the 30 most sought-after start-ups in the secondary market.

The rise in late-stage valuations from Q1 to Q2 “came as a surprise considering the drop in median deal size and tepid public market exit conditions,” PitchBook said.

Not all is rosy in late-stage land. “Given their proximity to exit, late-stage start-ups have been faced with mounting pressure to justify high valuations and deal sizes amid rising inflation rates, geopolitical uncertainty and bearish public market activity,” PitchBook said. “In H1, that pressure manifested in a median deal size of $14 million, representing a decrease of 7.1 percent from the 2021 full-year median of $15 million. The modest drop in deal size suggests that investors are more hesitant to commit to late-stage rounds without favorable prospects of an exit in the near term.”

VCs outside the US aren’t necessarily seeing a decline in valuations, but they are seeing less competition for deals.

Hahn is happy to see what she calls “a return to substance,” noting that she has seen some blockchain start-ups raise “a crazy amount of money with nearly no substance. They didn’t have a white paper… [but] they raised millions and really hardly gave anything to the investors.”