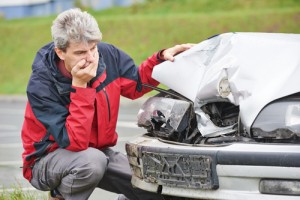 The National Venture Capital Association recently released the Q2 2014 VC fundraising statistics, and the headline was “Number of Venture Capital Funds that Raised Capital Hits Seven-Year High in Second Quarter.” This triggered two thoughts for me:

First, how could there possibly be a “Series A Crunch”? Are all the seed/early-stage VCs wimping out and moving upstream to later stage companies or is the “Series A Crunch” simply media fear mongering? We’ll discuss this at another point in time.

Second, and more importantly, the other thought that occurred to me was “here comes the downturn.” In general LPs are notoriously bad at market timing with their commitments, and the GPs are smart enough to take as much as they can when it is available, because the window can always shut on their fingers.

At Bison, we track more than 19,000 limited partners’ commitments to private equity/venture capital funds, and the performance associated with them. We looked at the our universe of information, and the findings should make LPs “tap the brakes” and make sure they are putting all prospective investments through the full gauntlet of due diligence, before they are writing checks for funds that will wind up on the secondary market in three years.

The chart below illustrates the volume of capital and the performance of more than 3,000 institutional commitments to venture capital funds. The performance covers 1981 through 2008. The reason we cut off the illustration at 2008 was to show funds that have had at least five full years to create value with their portfolio companies and should therefore be out of the J-curve. 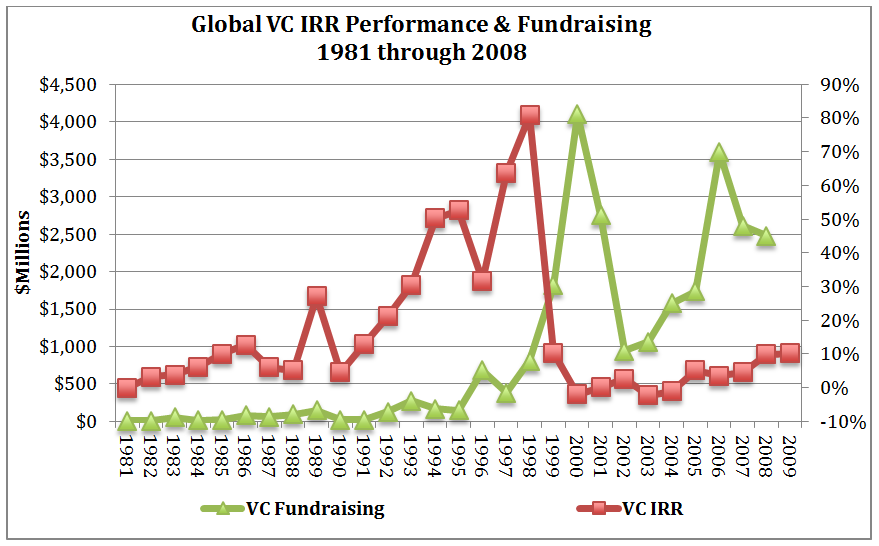 There are two major observations that come from this chart:

One, in general, LPs are very good at buying high and selling low. When VC performance (net IRR) peaked in vintage years 1997 and 1998, LPs were committing near record low amounts of capital. Only a few years later, they broke the bank with commitments at record levels, perfectly timed with the worst performance the asset class has experienced.

Two, I hate to admit this, given that I have been a long time VC evangelist, but as a whole venture capital looks like a terrible asset class. Over the 28-year history that we researched, the venture capital asset class only returned more than 2.0x invested capital ten times. Wait, it gets worse from an IRR perspective (as illustrated in the chart above). IRR, which we all know is an inaccurate assessment of investment performance, should show a favorable outcome for VC. Nope! VC as a whole only produced an IRR greater than 15% in eight of the 28 vintage years.

Given the seven-year high (there are a lot of jokes that should be inserted here) of venture capital fundraising, it may be a good time to batten the hatches and get ready for rough weather heading our way. I love what venture capital represents and what it does; otherwise I would not have quit my job as an LP and founded a startup company. But, the numbers are not compelling for the casual investor. Let’s hope that I am wrong and everything is sunshine and bubble gum for the next few years.

Which public pension is best at picking PE funds?

About the author: Michael D. Nugent is CEO and co-founder of Bison, which tracks fundraising and performance for venture capital and private equity funds. He can be reached at mnugent@bison.co. Follow him on Twitter: @mdnugent.

Note: This column first appeared on Bison’s blog. It was edited for style and content prior to publication on peHUB.