October was a weak month for VC-backed M&A.

But the year is on pace to exceed $30 billion in the combined value of venture-backed companies sold for only the third time in the past 10 years, according to a VCJ analysis of the data from Thomson Reuters. And the year should eventually rank as the second largest in the last decade.

In October, venture-backed M&A fell precipitously, reaching only $62 million in combined proceeds for acquisitions that closed, compared with nearly $3.4 billion in September, a drop of more than 98 percent.

A total of 18 U.S.-based VC-backed companies were acquired in October, with only three disclosing their financials. The top deal was Valence Health, which Evolent Health bought for $245 million. (See table below.)

However, year-to-date through mid-November, the M&A data indicates 2016 is on pace to exceed $30 billion. The last time the deal value reached that figure was in the off-the-charts year of 2014 when the multi-billion sales of WhatsApp, Nest Labs and Oculus VR combined to help push the venture-backed M&A activity to nearly $53 billion.

We have to return to the pre-Great Depression year of 2007 when annual VC-backed M&A last exceeded $30 billion.

So far in 2016, 250 VC-backed companies have been scooped up, with 63 disclosing their acquisition prices for a combined value of nearly $29.8 billion, according to the data.

Leading the way in 2016 is the $10 billion Stemcentrx acquisition by AbbVie in June.

But the sales of a couple of tech unicorns have also helped lift this year’s M&A totals. In September, Jet.com sold to Wal-Mart for $3.3 billion and Unilever paid a reported $1 billion to acquire Dollar Shave Club. That deal was announced in July and closed in late August.

Not included in the year-to-date tally is the announced sale of Krux, provider of a data-management platform, to Salesforce for more than $700 million of cash and stock.

Krux’s backers included Accel Partners, Sapphire Ventures, Time Warner and IDG Ventures, among others. The investors put $46 million into the company since it was founded in 2010.

IDG Ventures Managing Director Alex Rosen told VCJ that Krux, which provides data analysis for publishers, marketers and agencies to deliver targeted content, was a classic early-stage success story. An entrepreneur raised seed-stage capital, followed by a steady growth pattern of Series A and B rounds, he said.

The sale was announced in October but has not yet closed.

“This is how venture capital is supposed to work,” said Rosen, who pre-election said he was confident the M&A market would continue to pick up. IDG announced that the sale to Salesforce will help provide returns for most of its $100 million fund.

This year’s pace will put it ahead of last year. In all of 2015, 379 venture-backed U.S.-based companies were acquired, including 92 with disclosed values, which combined for a deal value of just $22.4 billion. 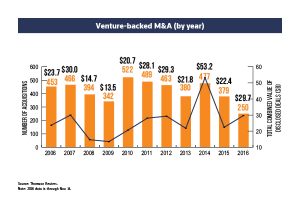