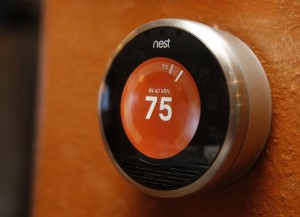 Nest Labs Inc. announced today that it will acquire Dropcam Inc., which makes the world’s easiest-to-use IP video camera as well as DVR service that stores all video securely in the cloud. Dropcam will become part of the Nest division at Google, which acquired Nest earlier this year.

Menlo Ventures, where I am a managing director, realized a return of 8x in less than three years on this investment.

According to Juniper Research, the smart home market will reach $71 billion by 2018 — up from $33 billion in 2013, and $25 billion in 2012. Major vendors like AT&T, Comcast, Honeywell, and Verizon (just to name a few) are also investing effort in the space. Products like Dropcam, Nest, and Roku are part of a new generation companies redefining old, boring categories. What they have in common is beautiful “Apple-like” design and ease of use, and always-on connectivity that make them useful for much more than initially meets the eye.

Dropcam, for example, can be used as a baby monitor or security camera, but for many users it has become part of their daily life, to check up on children or pets left at home, and to instantly share video clips on social media. With new motion detectors and nighttime cameras, Dropcam has an opportunity to become a full-fledged security system and take over a significant share of a mutlibillion dollar market.

Each Dropcam can also be used as a Bluetooth LE hub for other devices in the home. BLE is a core technology in the home and the Internet of Things, and we will start seeing appliances of all types incorporate this technology.

Dropcam’s DVR service also demonstrates how flexible and cost-effective cloud technology has become.  A few short years ago, it would have been impossible to stream HD video from millions of cameras and store it all for 30 days at a time. Even a year ago, Dropcam was uploading more video to Amazon AWS than YouTube.

The infinite scalability of compute and storage resources in the cloud means that devices like these will keep getting smarter and more capable, creating more opportunities for consumers and investors alike.

Mark Siegel is a Managing Director at Menlo Ventures, where he focuses on cloud infrastructure companies.  He currently sits on the boards of Pluribus Networks, Tintri, Voltage Security, Getaround, Invidi, eXelate, and Dstillery. In addition to Dropcam, Menlo’s investments in the connected home space include Roku, and early stage companies Zuli and Portal.

Photo credit: A Nest thermostat is installed in a home in Provo, Utah, January 15, 2014. REUTERS/George Frey