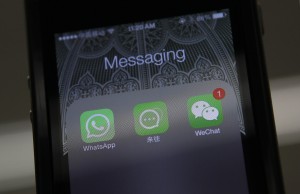 Now the fever is spreading to the enterprise.

“Consumers have gotten in the habit of using texting in their personal lives,” said Sean Flynn, a partner at Shasta Ventures. “So it’s no big surprise that they are starting to text in the context of work.”

But using apps like WhatsApp, Snapchat or Instagram for business is not something that sits well with most corporate IT departments.

“That creates issues for the enterprise in terms of how secure the data is, who has access to the data, and what you do when an employee leaves the company,” Flynn said. “Organizations still want to offer the efficiency and ease of use related to texting, but they want to have enough control over it to assure they can address all the different issues that may arise.”

That logic has given rise to a number of new venture-backed messaging companies geared exclusively at the enterprise. TigerText, which targets the healthcare market, just raised $21 million from Shasta Ventures. Cotap, a workplace mobile messaging system that is aimed at large retailers like Walmart, has raised $15.5 million from Emergence Capital Partners and Charles River Ventures. And Remind101, a mobile messaging app for school teachers, recently landed $15 million in a Series B round led by Kleiner Perkins Caufield & Byers.

For Jason Green at Emergence, investing in an enterprise messaging company like Cotap was pretty much a no-brainer.

“As enterprise investors, we don’t have to be as visionary anymore,” he said. “We can just look at the big trends in the consumer space and know that a few years down the line the enterprise will be impacted by these same things.”

Green said that, before the rise of mobile, it was the enterprise that traditionally was the early adopter of technology, with the consumer following later. Today, that paradigm has been turned on its ear. Consumers are adopting technology in a much more nimble and frictionless way, he said. That means he is closely watching consumer trends and behaviors to determine what will be the next big thing in the enterprise.

Obviously, text messaging is one of the hottest consumer trends with the soaring popularity among consumers of apps like Snapchat and Instagram.

“These apps are taking the world by storm and are generating huge engagement,” Green said. “If this is the way people want to communicate with their friends and family, it’s only a matter of time before it impacts how they communicate at work.”

And though messaging apps like Cotap and TigerText are ultimately an enterprise sale, it is the end user and individual employees, not the corporate IT department, that are initially introducing these products into their organizations. Cotap and TigerText each provide a freemium business model that lets anybody download the application and start using it.

The idea is that once individual employees and small teams start using an app like TigerText or Cotap, they will tell all their colleagues about it. The sales teams from these messaging companies can then swoop in and target organizations where it knows it already had some kind of toehold, eventually selling an enterprise license.

“As a single user you can sign up and use TigerText for free,” said Flynn, who led Shasta’s investment in the company. “But if an organization wants all the administrative features that sit on top of the platform, like security and provisioning and integration with an existing technology stack, then it has to pay a per-user licensing fee.”

TigerText has taken a relatively narrow approach, concentrating primarily on the healthcare market where security and compliance are paramount. This industry focus means that the company can efficiently marshal its sales and marketing resources, as well as build features uniquely suited to healthcare customers.

“In the hospital context, for instance, doctors will go on and off call at certain times,” Flynn said. “TigerText features a specialized use case where someone at the hospital can message whichever doctor happens to be on call at that particular time. We are going after hospitals because they have a strong need for a priority communications channel.”

TigerText currently has about 3 million users across more than 10,000 organizations. While the company remains focused on healthcare, other mobile messaging apps are targeting different verticals.

Remind101 is going after the education sector. A growing number of teachers are using Remind101 to send group messages that reach both students and parents. Typically, the messages communicate classroom information, and, as the names suggests, remind students to do their homework.

“Remind101 is first and highly focused on being a viral communication service,” Kleiner’s John Doerr recently told Forbes. “You see elements of Instagram in their adoption, and they are centered on serving teachers. If there was ever a service every teacher should use, it would be Remind101.” The company says its service will always be free for teachers, but that it could start to charge schools or add premium features that parents would want to pay for.

Like most consumer applications, the immediate goal for these new enterprise messaging services is to land as many users as possible and worry about monetization later.

The biggest challenge when investing in this space, Green said, is not getting organizations to pay up. Rather, it’s designing an amazing product that users will embrace. And that’s a big reason why he invested in Cotap: because the company was co-founded by the former head of product at Yammer, a successful social enterprise tool lauded for its simplicity and virality.

“This is a team that knows how to build products that users love,” Green said. “All the power has shifted to end users in terms of the adoption of technology. It’s no longer about the CIO shoving technology down the organization’s throat. This team designs for the end user, not for the CIO.” He added that elegant design is even more crucial for mobile applications because the devices have a lot less screen to work with.

The investment in Cotap was part of Emergence Capital’s overall thesis of backing enterprise applications designed from the ground up for mobile. “Messaging is just the tip of that spear,” Green said. “Mobile will be the biggest battleground in the enterprise over the next five years.”