The Mithril Capital diaspora has blown all the way over to Ohio. Mithril alums James J.D. Vance and Colin Greenspon have co-founded a new venture firm called Narya Capital and have already raised $93 million toward a target of $125 million.

Greenspon and Vance are joined by Partner Falon Donohue, who was the first CEO of VentureOhio, which aims to increase access to capital for Ohio entrepreneurs, and who also founded Sadie Ventures, a seed-stage venture firm based in Columbus, Ohio.

Greenspon and Vance are among eight of 11 team members who left growth-stage investor Mithril in the past four years. (Read Where are they now: Mithril Capital.) Both left to join Steve Case’s Rise of the Rest Fund, which invests in promising startups in markets that rarely attract significant amounts of venture capital. They will both continue to serve as advisers to Rise of the Rest, Axios reported.

Like Rise of the Rest, Narya will support entrepreneurs in under-served areas such as Salt Lake City, Atlanta and Raleigh-Durham, Axios reported.

Case’s Revolution investment firm announced in October that it had raised $150 million for its second Rise of the Rest Fund.

Vance is best known as the author of “Hillbilly Elegy: A Memoir of a Family and Culture in Crisis,” which recounts the despair and lack of opportunity he encountered growing up in the small town of Middletown, Ohio.

Based in Cincinnati, Narya, like Mithril, takes its name from the fantasy novel “Lord of the Rings” by J.R.R. Tolkien. It is one of three “rings of power.” When the wizard Gandalf is given the ring, he is told: “Take now this Ring, for thy labours and thy cares will be heavy, but in all it will support thee and defend thee from weariness,” according to a fan forum. “For this is the Ring of Fire, and herewith, maybe, thou shalt rekindle hearts to the valour of old in a world that grows chill.”

Action Item: To reach Narya, email the firm at info@naryavc.com. 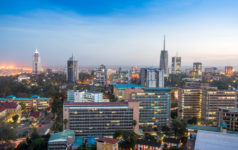 News Briefs 1 day ago
Added to your Saved Articles
Loading
Unsave Article
Please confirm you would like to remove this article from your saved articles.
Share with other subscribers
Only logged in subscribers of this site will be able to access the shared article.