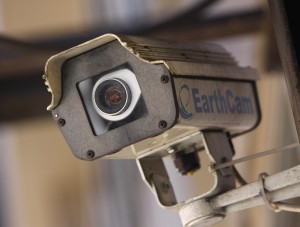 Lately, however, early-stage VCs have also actively invested in the brick-and-mortar world of home security.

Since last year, at least eight startups developing hardware and software with home security applications have raised funding rounds. Another, alarm system developer SimpliSafe, raised a $57 million from Sequoia Capital this spring, in a first-time venture round for the five-year-old company,

Much of the funding activity comes on the heels’ of Google’s acquisition of smart thermostat make Nest in January. That deal, with its $3.2 billion price tag, offered evidence that acquirers are willing to pay handsomely for smart home devices and applications that show traction.

Google and Nest demonstrated further appetite for acquisitions in June with the purchase of Dropcam, a venture-backed video monitoring system and storage service, for $555 million. The respectable post-IPO performance of another VC-funded home automation player, Control4, which went public last year, provides another proof point.

The latest crop of funding recipients is making the case that their applications will offer a better, easier or cheaper way to monitor one’s home or address security issues. For instance, Revolv, backed by the Foundry Group, sells an app and plug-in device with seven wireless radios. Its pitch is that the $300 box can control a variety of sensor-enabled devices, regardless of which wireless network standard they use.

Canary Connect, funded by Khosla Ventures, is marketing its connected device as a lower-cost option appropriate for renters or middle-to-lower income homeowners, who typically do not have home security systems.

Others are solving a more specific problem. KeyMe, backed by Battery Ventures, offers an app for scanning and copying an image of one’s keys. Customers can use those images to make duplicate keys when needed, which comes in handy if they are ever locked out of the house.

In the accompanying table, we take a look at nine companies with home security applications that have raised funding since last year, focusing on backers, business models, and total capital raised.