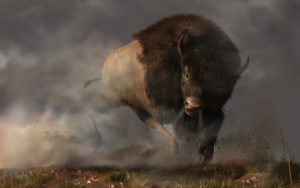 Startups are in the disruption business. Move fast and break things, that’s what they do.

But there’s a trillion-dollar industry where they’ve made barely a dent: credit cards. The 15 largest credit card issuers still control 90 percent of the U.S. market, collecting more than $160 billion a year in interest charges and fees alone, according to industry research organization R.K. Hammer.

Now, though, a handful of credit card startups are aiming to crash the party.

“The time has come for tech startups to go after this massive industry,” said Gaurav Jain, cofounder and managing partner of Afore Capital. “Millennials and Gen Z especially are looking for a new kind of credit experience.”

To give it to them, Jain is backing fintech startup Petal. The company, which earlier this year raised $30 million in a Series B round of funding from Afore, Valar Ventures and other firms, offers credit cards to people who don’t have a credit score.

It’s a large market. There are 65 million Americans who don’t yet have a FICO score. A lot of them are young, they don’t have a mortgage, they’ve never taken a car loan, and, as a result, they’re ignored by the credit card incumbents, which just assume they’re a bad risk. This is partly why two out of three millennials don’t have a credit card and more than half of Gen Z members say they don’t ever plan to apply for one.

“If you don’t have a FICO score, you’re essentially subprime,” Jain said. “But a significant portion of these people would be prime borrowers if given a chance.”

The trick is finding them. To do that, Petal tests the mettle of potential customers with a proprietary algorithm that uses millions of data points to assess those people who live off the FICO grid.

Its algorithm looks at data like your paycheck (is it steady?), your rent and phone bill (do you pay them on time?). It can peer into your bank account during the application process and, in the end, create “what is essentially a parallel FICO score,” Jain says.

If you’re approved, Petal requires no security deposit, unlike many starter cards, and charges no yearly fee. The Petal Credit Card’s interest rate is relatively low, and it offers cash-back rewards on par with cards aimed at people with good credit. To get a banking license and instill trust in its brand, Petal partnered with Visa.

The Petal Visa now has tens of thousands of card holders and Jain predicts 100,000 by year-end. “As investors, we knew this problem was real and the demographic of ‘invisible prime’ customers was large,” he said. “This is a company that can be extremely innovative and profitable going forward.”

Even though the potential market is huge, Jain is quick to admit that there are still massive challenges for startups. He says that launching a new credit card was harder and more complicated than he ever imagined.

“When you’re a nobody, it’s really hard to get started. You can’t get a banking license, so you have to partner with a bank that is willing to attach their reputation to your unknown brand,” he said. “You also have to partner with a large payment network, such as VISA, that is willing to take you on. And you need to have deep pockets and be able to raise a credit line to carry the balances of your customers. And you have to be able to combat fraud. That’s probably why there has not been so many new entrants.”

A card for deserving foreigners

Deserve is another credit card startup that’s hoping to use an overlooked demographic to gain a foothold in the credit card market. It offers cards to students and professionals who are new to the U.S.

Deserve has raised $97 million from Aspect Ventures and others and has partnered with MasterCard.

“What stood out to us was Deserve’s approach of providing credit cards to foreign-born grad students and H1-B visa holders,” says Lauren Kolodny, partner at Aspect Ventures.

There are more than 1 million international students enrolled in U.S. colleges each year. They, along with a lot of foreign-born professionals, are creditworthy but have a thin U.S. credit profile, so most card companies ignore them.

Kolodny saw Deserve as an opportunity to enter the credit market without competing in the extremely competitive field of traditional credit and sign up a group of customers with high potential.

Since launching, Deserve has expanded to serve college students and grad students who struggle to get credit. The Deserve Edu Card is available even to those with no credit history. It has no annual fee, a rewards program and free membership in Amazon Prime Student. It charges no foreign-transaction fees and a lenient $25 late fee.

“When we made our investment in Deserve only about 40 percent of millennials were using credit cards and the rest were all using debit cards, which was a legacy of the great recession,” Kolodny said. “Millennials came of age at time of distrust toward financial institutions. What makes Deserve unique is that they really bring an orientation around helping their customers build credit and making it easier to increase limits over time when customers display good credit hygiene.”

Kolodny believes exits in this space will be available via existing financial institutions, as well as companies like PayPal, Square and other early movers in fintech that now have big balance sheets. Kolodny also said there is room for new standalone brands in the category and says she wouldn’t be surprised to see some meaningful IPOs in the near future.

A credit card startup for startups

Along with students and immigrants, another group that traditionally had trouble getting access to credit is startup founders. Early-stage startups are typically shunned by credit card companies because they don’t have revenue. As a result, founders often have to use their high-interest personal credit cards to fund operations and thus rack up significant debt.

That’s where Brex comes in. Brex, which offers corporate credit cards for Silicon Valley-style startups, has raised more than $380 million from Kleiner Perkins, IVP, Y Combinator and Barclays. The Brex Visa helps future tech titans to quickly get a credit card with high spending limits and without having to provide a personal guarantee.

This is a major perk for tech startups because personal guarantees give financial institutions the right to seize a founder’s personal assets to pay off debts in the event the company goes out of business. And tech startups tend to fail at greater rates than other small businesses.

Brex also offers a unique rewards program that is designed to appeal to tech startups. For instance, instead of a cash back program, card users can receive $5,000 in AWS credits, $375 off an annual Salesforce subscription, and a 15 percent discount off any WeWork desk or office space.

Despite the serious challenges of raising a lot of capital, adhering to strict government regulations and competing with huge incumbents, credit card startups that can gain entry to the market have a large opportunity for disruption and should collect sizeable rewards of their own.

“We have one of the biggest industries in the world controlled by a few incumbents that are doing a terrible job of serving customers,” says Tim Young, founding general partner at Eniac Ventures, which led an $8.5 million round in 2017 for credit card startup Zero. “Yes, this industry is hard to break into but there is massive opportunity. A startup that can get just 1 percent of the business of any of these incumbents will be a multibillion-dollar company. Once you get a product in the market that resonates with customers, you can build an enormous company extremely fast.”

Zero hopes to resonate with millennials who lived through the Great Recession and are wary of falling into debt. It offers the Zerocard, a hybrid that works like a debit card (it immediately deducts charges from your prepaid Zero account) and a credit card (it gives rewards for purchases).

Zero has raised $35 million to date. Young hopes an IPO is in the future.

“If you figure out a customer acquisition and retention model that works, every challenger bank will be better off as a public entity,” he said. “We could have 10 of these challenger banking startups IPOing in the next several years. This is not a game of trying to get acquired for $500 million. This is a game of building $500 million in revenue and going public in three to five years.”