With the election of Donald Trump, Republicans from Capital Hill to the White House have big eyes for legislative reform, and no reform is bigger than the repeal of the Affordable Care Act, or Obamacare.

Efforts to unravel the ponderous law began prior to the swearing in of the new president as Congressional Republicans sought to remove the ACA’s financial underpinnings of taxes, fees and subsidies.

Whether you buy into repeal or not, the move creates dangers for venture capitalists. If Republicans upend healthcare, as they say they would like, investors could be blindsided by disruption in the startup ecosystem.

So far, many VCs seem sold that incremental rather than dramatic change will emerge from the fog of legislative uncertainty. But without the key pieces of the bill Republicans already have in their sights, before considering what they will do next, Obamacare could unravel and company formation and funding could slow in digital health, one of the hottest areas of venture investing.

“There is no lead indicator with any degree of confidence as to how this will unfold,” said David Sabow, a managing director at Silicon Valley Bank and head of its life science and healthcare practice. “There is a risk that there is a bit of a freeze resulting from the uncertainty today, and there is a risk that digital health. in particular. ends up in a wait and see.”

Such an eventuality could place a substantial curtain of doubt on life-sciences investing during a year already threatened by many unknowns. With the new presidential administration, issues such as drug pricing and federal Food And Drug Administration policy, are up in the air. Without a clear picture of the road ahead, crossover investors now active in healthcare could find their determination shaken and late-stage capital in the sector become more cautious.

All this could spark a hiatus much like the industry experienced in 2010, when the ACA was signed into law and venture investors kept it at arms length for several years, unsure of how to turn its provisions into startup opportunity. It was only in 2014 did the hesitation fully burn off and digital-health funding soar to more than $4 billion annually, where it has remained through 2016.

Venture investors by in large are upbeat about this year’s investment landscape given the innovation taking place in such fields as oncology and genomics. Most see healthcare dollars remaining similar to 2016, or perhaps rising slightly, and assume most sectors will be unfazed by the effort on Capital Hill, including biotechnology, drug development and even elements of health IT. Any decline will come in consumer-focused digital health, though the community doesn’t seem convinced at this point a fall is certain.

There are many reasons to support this view. Republicans would likely find it suicidal to take insurance away from the about 20 million Americans who secured a policy under Obamacare. They could likewise come to regret turning the industry’s clock back to fee-for-service reimbursement. Under Obamacare, the shift to value-based care has helped curtail runaway prices, and many venture investors don’t anticipate this course to reverse, though they acknowledge it may slow, along with the move to bundled pricing.

Other popular parts of the act, such as coverage for pre-existing conditions, don’t appear ready to disappear.

If these key pieces of the act remain, Republicans have little wiggle room for changes to the healthcare system, hence the belief in incremental change.

Also supporting the upbeat mood about life-sciences investing this year are the demographics behind healthcare demand, an aging population, the lack of access to primary care, the rise of chronic diseases. They aren’t going to change.

“There is going to be a lot of noise, a lot of fear,” said Bijan Salehizadeh, a managing director at NaviMed Capital, of the Obamacare repeal. “But on the other side, it is going to look awfully similar.”

Still, forecasting the new legislation is a difficult calculus simply because so little is known about what the Republicans might do. What’s more, baked into the reform promises of the GOP-led Congress are several major contradictions.

If the individual mandate requiring healthy people to buy insurance and balance the payer risk from unhealthy, unprofitable patients goes away, if Medicaid is transferred to the states and if pools are created for high-risk patients, such as those with cancer, substantial change could be in the air with sharply higher policy prices. Already the Congressional Budget Office has warned of this.

And with the path paved for eliminating the tax penalties for people who go without insurance, along with billions of dollars for the expansion of Medicaid, the subsidies for health insurance obtained on exchanges, and perhaps some taxes and fees that pay for the ACA, such as those on high-income individuals and prescription drug and medical device makers, the economics don’t work.

In other words, foreseeing an outcome is impossible, something the venture community acknowledges.

“To me, it remains very unclear how you deal with the core tenet: how you get this population into the ecosystem,” said Bryan Roberts, a partner at Venrock. “I feel like shooting from the hip is going on. That’s scary in a whole variety of ways.”

Key questions remain, such as whether subsidies for healthcare insurance go away, whether physicians decrease the rate they move to value-based care and whether large employers stall buying things until the future looks clearer, Roberts said. Consequences are possible depending on how things turn out, he said.

Another variable Brent Ahrens, a general partner at Canaan Partners, is watching closely is patient population. If the ACA is repealed and significant numbers of people lose insurance, the patient population entering hospitals with insurance falls.

“I think that’s one of my bigger takeaways,” Ahrens said. “We’re not worried about it. We’re watching it.”

There also is concern the process could take longer than Republican leaders hope, creating a long period of uncertainty.

“It’s going to grind,” predicted Kush Parmar, a managing partner at 5AM Ventures. “I think it’s going to be a lot slower than a lot of people imagine.”

If drug pricing gets roped into the debate, which at present seems unlikely, an additional Pandora’s Box opens.

Facing these unknowns, some firms have adjusted their investment focus.

This could including looking closer at genomics, software for drug development or personalized-medicine software for helping companies better develop drugs. And while it doesn’t mean shying away from big data and analytics, or wellness and consumer wearables, it could result in spending less time with consumer paid business models.

“We definitely have to be more opportunistic,” Teo said. “At a high level, the uncertainty is going to scare off public and private investors.”

And yet, “companies that are in the core practice of healthcare, they will do well,” he added

With key decisions still ahead, “we are left in that kind of purgatory,” acknowledged Mohamad Makhzoumi, a general partner at New Enterprise Associates.

But this is a cycle in healthcare that investors have seen before, Makhzoumi said. “Every eight to 12 years we get a bit piece of legislation that creates headwinds and tailwinds.”

Once the new rules are written, investors can get back to making bets that look good in the new environment. There are always opportunities around reform, he said. 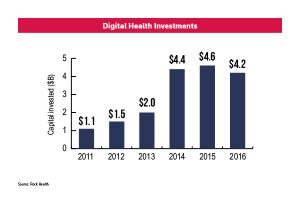 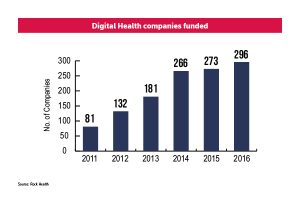 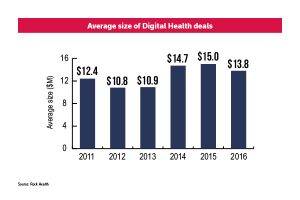