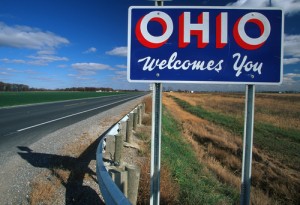 Chris Olsen once viewed the great state of Ohio and environs from 33,000 feet when he was winging his way cross-country as a partner at Sequoia Capital.

These days, Olsen is solidly on the ground as a co-founding partner at venture firm Drive Capital in Columbus, Ohio, the heart of flyover country.

The Cincinnati native said he was lured back to the region because of its economic potential.

Midwest colleges and universities account for 25 percent of U.S. technology research and awards 25 percent of the country’s engineering degrees to graduates who prefer to remain closer to home rather than take jobs in Boston, New York or San Francisco.

“There are tons of universities spinning out thousands of talented engineers who want to go off and start technology companies,” said Olsen, who spent six years at Sequoia as a partner before launching Drive with Mark Kvamme, another Sequoia partner, in 2012.

Apparently, the decision to start a VC firm was well-timed given the entrepreneurial explosion under way in the Buckeye State.

“Every major city in Ohio and across the broader Midwest has multiple accelerators and incubators,” he said. “They’ve been laying a lot of the groundwork for entrepreneurs to gain access to the right support network to get their businesses launched and then build their products and take them to market.”

“Nobody in the investment community was taking advantage of that until we came along,” he added.

Olsen said he expects to fund 25 startups out of Drive’s $250 million first fund; 10 deals have been completed to date.

Investments can range in amounts from as little as a few hundred thousand dollars to $25 million, he said.

“If we find a great company, we’ll figure out a way to write a check,” he said.

The firm has been plenty active of late.

Last year, Drive and GE Ventures led an $8.5 million Series A round in Columbus-based Aver Informatics, which has come up with an automated pay-for-service technology to improve the accuracy and security of patient medical records.

In April, Drive led a $15 million Series B round in CrossChx, another Columbus-based software developer startup, which has come up with technology to reduce the misuse of prescription drugs. The technology has been sold to more than 200 hospitals. Khosla Ventures also participated in the round.

“What’s going on in Cincinnati, Cleveland or Columbus is not unique,” said Ray Leach, founding CEO of Cleveland-based JumpStart, a nonprofit that provides mentoring services and makes early-stage investments in area companies from a number of funds raised from public and private sources.

“There are many reasons to invest in companies in the Midwest,” Leach said. “It is a less competitive space than the East or West coasts. And the valuations are a lot lower.”

Those companies have raised about $800 million in follow-on capital, and 20 have had successful exits.

In addition, Leach said JumpStart has coached between 300-plus companies, which have gone on to raise $1.5 billion in capital.

Until recently Cleveland has received 80 percent of the deal flow in the state, Leach said.

But Cleveland’s slice of the pie has dropped to less than 65 percent, thanks to the arrival of Drive Capital in Columbus and the impact of entrepreneurial support programs. There are two such programs located in Cincinnati: CincyTech, a public-private seed stage investor, and Cintrifuse, which operates mentoring services to entrepreneurs. The latter runs a successful accelerator program as well as a $55 million fund of funds, though the agency doesn’t always invest in firms that do deals in Cincinnati.

“The big story in Ohio is the role of the public sector in its willingness to be a catalyst,” said Leach, who gave credit to the Ohio Third Frontier program, a13-year-old state agency that has spent more than $1.6 billion in a bid to replace the state’s sagging rust belt economy with tech companies.

“CoverMyMeds raised a very modest amount of capital, but the company was able to scale very quickly,” Leach said.

“It’s been a decade-long process to get to exits, but we hope to improve that process over the next few years as we attract more capital from outside the region,” he added. “Ohio’s greatest challenge is how do we fund the 30 to 50 companies that need to raise $3 million to $5 million each, when we don’t have enough Series A venture funds headquartered here.”

Wendy Lea, the CEO of the Cincinnati-based Cintrifuse, said her agency has come up with one approach that’s been successful in matching VCs with those local companies that need money, as well as guidance.

Lea said Cintrifuse has flown in VCs from more than 250 firms nationwide to expose them to potential investments as well as meet with the agency’s LPs and other investors in the region.

“We want to show these VCs that we mean business,” Lea said. “We’ve built a lot of important relationships that way that are starting to pay off.”

Late last year, Lea said the agency worked with Spark Capital and Greycroft Partners to close a $13 million Series A round in Cincinnati-based Everything But The House, a website that conducts high-end estate sales online.

She said such success stories help “expose the region’s entrepreneurs to potential investors outside the region” and also help attract talent to the city to build up a technology sector.

“We’re not looking for call center workers, with all due respect, but entrepreneurs trying to solve very difficult problems across industries,” she said.

She said what’s unique about Cintrifuse is that 10 of her 140 limited partners, which includes Kroger, Procter & Gamble and Western Southern Life Insurance Co, are within walking distance of her offices in Cincinnati’s bustling business district bordering the Ohio River.

The close proximity allows corporate employees to join in on the various events and activities, as well as provide mentoring if called upon.

Drive Capital’s Olsen said incubators, accelerators and mentoring programs, such as Cintrifuse, are pulling people from as far away as China and Europe.

“Technology, which first sprouted out in Silicon Valley, has worked its way into just about every business on planet Earth,” Olsen said. “And we’re seeing just about every company in the Midwest being infiltrated with technology-enabled services that are changing the way things are produced, such as health care, insurance and manufacturing.”

“It’s a great time to be a venture capitalist in the Midwest,” he said.