Venture Capital Journal
Home News and Analysis Firms & Funds Reporter’s notebook: The healthcare IT deals that got away
Return to search
Firms & Funds 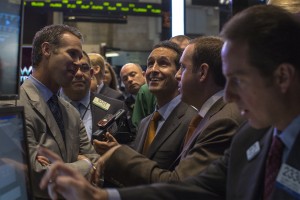 The pool of venture capitalists focused on digital health is relatively small.

So one gets the impression a well-connected investor in the space sees pretty much every company raising a venture or later-stage round.

So who are the ones that got away? That was the question Venrock’s Bryan Roberts asked attendees at a recent dinner in San Francisco organized by the firm for healthcare IT entrepreneurs, VCs and media.

Roberts said he wished that his firm had backed CoverMyMeds, a six-year-old company in Northern Ohio that provides a service for health insurers to authorize coverage of medicines before they are prescribed and dispensed. The company, ranked as the eighth fastest growing U.S. health technology company by INC, has to date received a little more than $5 million in venture funding from Cleveland startup accelerator JumpStart and others.

While there’s still opportunity to invest—potentially in a late-stage round or secondary transaction—it will be at a much-increased valuation.

Roberts and Mike Dixon, a Sequoia Capital partner focused on the healthcare IT space, wished there had been an opportunity to invest in Epic Systems, which makes software for hospitals to integrate budgeting, patient recordkeeping and other records. Epic, based just outside Madison, Wisconsin, has seen its revenue skyrocket over the past decade, as large hospital systems sign on for its notoriously grueling installation process. Judy Faulkner, Epic’s billionaire founder, still runs the company she started in 1979 and has a long record of turning down would-be investors.

Emily Melton, a partner at Draper Fisher Jurvetson, cited Grand Rounds, formerly ConsultingMD, as an example of one that got away. The San Francisco-based company connects patients to top-ranked medical experts for visits and second opinions on diagnoses and treatments. This summer it closed a $40 million round led by Greylock and joined by existing investors Venrock and Harrison Metal Capital.

While they lament those they missed, healthcare IT VCs also have been backing big rounds for other companies. Venrock, in addition to investing Grand Rounds, funded recent rounds for Kyruus, a service for hospitals to match patients with specialists, and Doctor on Demand, which offers an app for video consultations with doctors.

Sequoia, along with Norwest Venture Partners and others, backed a $40 million round earlier this year for Health Catalyst, a provider of healthcare analytics.

Perhaps the largest recent investment in the space went to Flatiron Health, a New York-based developer of patient records software with a focus in oncology, which closed a $130 million round in May led by Google Ventures. Practice Fusion, which provides electronic medical record technology, is also up there, with total funding to date of $140 million

Where is the money going? Office space, for one thing. Currently, for example, both Doctor on Demand and Grand Rounds have offices in San Francisco, and CEOs of both said they are looking for space, a common problem in a city that appears to be morphing from popular startup location to center of the startup universe.