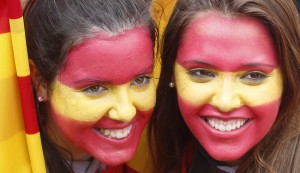 The Spanish economy is in turmoil, the result of a real estate crash that is cascading over the nation. The unemployment rate recently hit a record 26%, and among 16- to 24-year-olds, a staggering 55% are out of work. While the rest of the world is clawing out of recession, Spain is sinking deeper into crisis.

However, even though the Spanish economy is on life support, the venture market refuses to give up the ghost. In fact, there are even a few signs of life.

Active Venture Partners recently closed its second fund at €54 million ($70 million), exceeding its initial target of €45 million ($59 million), to become one of the largest technology investors in Spain.

Kibo Ventures, a new Internet-focused venture firm in Spain, is close to wrapping up its €45 million ($59 million) fund. And founders from some of Spain’s most successful tech ventures, including software downloading site Softonic and travel site eDreams, have created The Emprendedores Fund, which will commit small amounts of capital to the next-generation of tech entrepreneurs.

The country has also seen several notable startup success stories over the past few years. Barcelona-based eDreams is currently the largest independent online travel agency in Europe. BuyVIP, a Madrid-based private sale site backed by Active Venture Partners, was acquired by Amazon in 2010 for about $100 million. And Privalia, another flash-sale site first backed by Spanish venture firm Nauta Capital, has raised hundreds of millions of dollars from international investors like General Atlantic and Highland Capital Partners, according to Thomson Reuters. The company now boasts annual sales of $500 million. Most recently, game developer Social Games, also backed by Nauta, became the fifth largest social gaming company in the world, and could one day become the top player.

Still, it isn’t easy to be a VC or a startup founder in Spain, especially at a time when the rest of the world looks at the country and sees a dire financial mess. Because the real estate and construction bubble imploded, everyone assumes the technology market is suffering just as badly. This makes it harder for investors in the country to raise money, and for promising startups to get funded.

“The reality is that the current economic cycle is decoupled from the venture cycle,” says Marcel Rafart, a general partner at Nauta Capital. “The fact that the Spanish economy is now in crisis has nothing to do with the number of good companies currently being created in the country.”

This sentiment is echoed by other Spanish venture capitalists, like Alfonso de Leon, founding partner of Axon Capital in Barcelona.

“We are an island in the Spanish economy because [venture-backed] companies are seeing growth and that is something that not a lot of people in Spain can say right now,” de Leon says. “If you have money, it is the best time to be an investor in Spain.”

It’s also the cheapest. Spanish VCs report that valuations have dropped by 50% or more since their peak four years ago. Even solid, rapidly growing companies are impacted. De Leon says his firm has recently invested in a startup with about $10 million in revenue and a valuation below $10 million.

“In the U.S., that kind of company would have a valuation upwards of $50 million,” he says.

Two of his firm’s most recent investments are Akamon Entertainment, a social gaming developer, and Nice People at Work, a video distribution platform. In both cases, Axon was able to secure favorable valuations for these startups, even though they were producing revenue and aggressively expanding into new markets like Latin America.

“These companies are developing cheaply in Spain because hiring talented developers and engineers is quite economical here,” de Leon says.

The cost of hiring an engineer in Spain is about one-fifth of what it would cost in Silicon Valley.

“That’s why our investments are focused on the digital enterprise, where there is a heavy engineering component and we can leverage those advantages,” says Alberto Gomez, managing partner at Adara Venture Partners.

A prime example is AlienVault, an enterprise security company first backed by Adara in 2007. Last year, the company landed a $22.4 million investment round led by Kleiner Perkins Caufield & Byers. It has since relocated its corporate headquarters to Silicon Valley, but the entire engineering, development and technical support remain in Spain. AlienVault is a model investment for another key reason: it was able to land a brand-name U.S. investor in Kleiner Perkins. But AlienVault is more the exception than the rule.

“If you go to the U.S. or Europe to raise funds for Spain, people in those places don’t have the perception that there are good companies being developed here, though I think they are wrong in that respect,” de Leon says.

It doesn’t help that the Spanish government can make it difficult to launch a company in the country. Rafart from Nauta says that much still need to be done to make Spain competitive with other advanced countries in the world.

One thing in particular that spooks foreign investors is Spain’s labor regulations, especially related to layoffs. In Spain, companies have to hand out huge severance packages to their outgoing employees in a layoff. Until recently, the mandated compensation was 42-days pay for every year worked, although that figure has recently been lowered to 25 days.

Another challenge is access to follow-on financings. Spanish VC funds tend to be on the smallish side, and there are only about a half dozen active firms in the country. That means they often have to take their companies from start to finish on their own, even though that don’t necessarily have the financial means to do so.

“Entrepreneurs in Spain know they have to push out of their comfort zone and look for more stable markets, so the internationalization efforts here are huge.”

“We don’t have big funds in Spain, so sometimes we have to sell companies before we want,” de Leon says.

Most recently, one of Axon Capital’s most promising portfolio companies, video-on-demand service Wuaki.tv, was sold to Japanese ecommerce giant Rakuten for an undisclosed sum. De Leon says the firm would have loved to stay invested longer in Wuaki, “but we could not because the amount of capital required to take that company to the next stage was more than $50 million, and we did not have that capacity.”

Still, Spanish startups do have a few things working in their favor. Perhaps the most potent is their natural affinity for Latin American markets. Instead of concentrating their efforts on the moribund Spanish market with 45 million people, a quarter of who are unemployed, most Spanish startup are targeting the booming Latin American market and its 500 million potential customers.

Latin America is a natural expansion path for Spanish companies because of their common language and their strong cultural and historic ties. “This is a route that is not commonly taken by U.S. or European-centric startups,” says Christopher Pommerening, managing partner of Active Venture Partners. “Entrepreneurs in Spain know they have to push out of their comfort zone and look for more stable markets, so the internationalization efforts here are huge.”

Pommerening cites portfolio company Whisbi Technologies. The Barcelona-based company, which provides ecommerce sites with video agents, recently opened a new office in Brazil and has plans for future expansion in the region.

Success stories like Privalia and BuyVip are also having a significant ripple effect within Spain. “It’s proving to young people that it is possible to grow great companies in Spain and reinvigorate the struggling economy,” Rafart says. “In general the entrepreneurship culture is seeing a revolution among young people in Spain. That is the one good thing coming out of this crisis.”