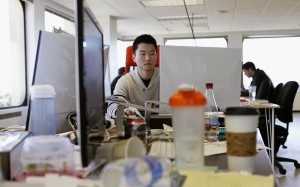 There are now at least 200 worldwide and the number of applicants they attract has doubled in the past two years.

But a lot of accelerators are just spinning their wheels. A recent study found that about half of them produced not a single graduate that went on to raise venture funding.

However, nobody is about to write off accelerators as a failed experiment. After all, the top performers in the field, including Y Combinator, TechStars and 500 Startups, have consistently produced an impressive roster of graduates that have gone on to raise substantial venture rounds, including names like DropBox, Airbnb.

A recent Forbes story reported that the total valuation of the 172 companies that graduated from Y Combinator is about $7.8 billion, or more than $45.2 million per company. Those are numbers that most VCs would kill for.

Still, not all that glitters is gold. Last year, Aziz Gilani, director at Houston-based venture firm DFJ Mercury, ran a study of 29 North American accelerators for the Kauffman Fellows Program. He found that 45% of them failed to produce one graduate that was able to secure venture funding.

Rather than say there are too many programs, Gilani prefers to say there is a quality gap. He notes that some accelerators are run by experienced entrepreneurs who have deep ties to funding sources and have sold companies before. And others, well, not so much.

But when select programs like Y Combinator start popping out potentially massive startups, everyone wants to replicate the success. That’s why we’re now seeing a flood of new accelerators countrywide, such as the Mucker Lab in Los Angeles, Blueprint for Business (BP4B) in Oklahoma City, Okla., and Gazelle Labs in Tampa Bay, Fla., to name just a few.

“To run an accelerator correctly you have to take the long view. If you are trying to optimize an accelerator for making money now, you will make some pretty terrible decisions.”

Gazelle Labs, which was offering $18,000 in seed funding per company in exchange for a small amount of equity, graduated just one class and is no longer actively accepting applications. It’s a fate some fear awaits all but the very best accelerators.

“You could say that starting your own accelerator has been a gold rush with no gold,” Gilani says. “It takes years for startups to get traction and reach an exit. To run an accelerator correctly you have to take the long view. If you are trying to optimize an accelerator for making money now, you will make some pretty terrible decisions. I would be very wary of any accelerator that thinks it will make money in the short term.”

Gilani expects the accelerator trend to move toward industry-focused programs, such as an accelerator for the cloud, for example, or energy. He says smart startups will gravitate to accelerators with expertise in their target field.

Already, that trend is evident, Greenstart in San Francisco caters to cleantech startups.

Also based in San Francisco, Rock Health, which has launched a Cambridge, Mass.-based chapter, operates as a seed accelerator targeting health-related mobile and Web applications. The accelerator has had two startup classes graduate from its program. At its last event in June, more than 300, including many investors from Kleiner Perkins Caufeld & Byers, Benchmark Capital and others were in attendance. About a half dozen of the startups said they were close to obtaining seed funding.

Thanks to the growth of accelerators and angel investors, not to mention a lowered cost of launching a business, startups can easily raise a seed round. But what’s not so easy is raising the real money it takes to build a winning company.

“We are in an environment where too many look-alike companies have been seeded with quite modest amounts of capital, and when they come back to raise their first institutional round, those entrepreneurs will be surprised by the relative paucity of Series A, B and C VC firms which are actively investing,” says Michael Greeley, a general partner at Flybridge Capital Partners.

Kauffman fellow Paul Kedrosky has a slightly different take. In his estimation, accelerators serve a useful purpose because they fill the venture pool with tons of tiny fish for the VCs to feast on.

“I’m in the camp that says you’re not doing enough accelerating until you are doing too much,” Kedrosky says. “I would rather there be too many than too few. Entrepreneurship by its very nature is an experimentation game.”

Alex Rosen, a managing partner at IDG Ventures, says he is neither pro nor anti-accelerators. All he cares about are great companies and great entrepreneurs.

What’s not so valuable, however, is the number of unoriginal, copy-cats coming out of these programs. “Accelerators end up creating lots and lots of me-too companies,” Rosen says. “How many daily deal or Web analytics or mobile ad targeting startups have come out of accelerators? Dozens, if not hundreds. It’s never good to have so many companies chasing the same finite list of customers.”

“If an accelerator can sort through thousands of applications and pick out 40 entrepreneurs, and 10 of them are great, then that is really value.”

DFJ Mercury is embracing the trend by investing in the accelerators. The firm has funded the likes of Excelerate Labs in Chicago, Surge Accelerator in Houston and Tech Wildcatters in Dallas. A key advantage, Gilani says, is that the firm gets to know startup teams well and can make informed decisions on whether to invest.

“For firms like ours that invest in non-traditional geographies, accelerators have made it easier to find great talent in these areas,” Gilani says. “There is no doubt that the quality of companies has materially improved because of accelerators.”

He is putting his money where his mouth is. Over the past two years, half of his investments have come out of accelerator programs.

But what will become of the lesser programs that don’t have the cache of Y Combinator or the connections of TechStars?  Will their graduates continue to be ignored by the Silicon Valley establishment? It’s no secret that programs like BP4B in Oklahoma City and Innovators Capital in St. Louis are struggling to get VCs interested in their startups, mostly because they are so far removed from tech centers.

“Right now we are looking for VCs and angel investors to come to Oklahoma City and see our young entrepreneurs,” says Guy Madison, managing partner of BP4B, which launched its inaugural class in August. “But, frankly, getting people from all over the country to fly in is a real challenge. It’s not easy.”

This is echoed by Judy Sindecuse, CEO of Capital Innovators. Even though her program has produced a number of promising startups, none has gone on to raise institutional venture funding. That said, the program has done a very good job of attracting follow-on funding from local angels.

For instance, a group of high network individuals in St. Louis recently created a new fund called Cultivation Capital with the goal of investing at least $1 million in Capital Innovators graduates. “Still, venture funding has eluded us,” Sindecuse says. “That’s the next piece of the puzzle.”

Whether VCs show up, many think accelerators fundamentally improve a startup’s chance of success. And maybe that’s what matters most.

“I believe that going through any accelerator improves the probability that that a startup will be successful,” notes Jed Christiansen, a Google executive who has conducted research into accelerator programs. “Perhaps I’m a bit of an optimist, but I would be surprised if any startup coming out of an accelerator would say that the program had hurt their chances for success or provided them with zero value.”

The Cream of the Top U.S. Accelerators

There are a lot of accelerators and incubators in operation nationwide. So last year, Last year, Aziz Gilani, a director at Houston-based DFJ Mercury, ran a study to determine the best ones.

The research found in looking at 29 North American accelerators, 45% of them produced not a single graduate that went on to raise venture funding. The only two accelerators that had a number of exits were Y Combinator and TechStars.

Not surprisingly, those two ranked the highest on the study. The top 15:

Photo: Tim Chae works at his computer where he attends 500 Startups, a crash course for young companies run by a funding firm of the same name, in Mountain View, Calif. Chae, 20, a Babson College dropout, has raised a small amount of capital for his company, Post Rocket. Robert Galbraith, Reuters.