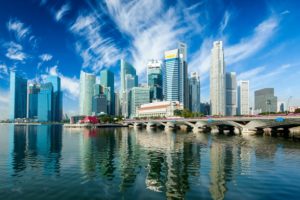 John Vaske has been given a clear set of instructions. As head of the Americas business at Temasek, an investment company owned by the Singapore government, Vaske is charged with letting the rest of the US market know that Temasek is here and it means business.

Vaske joined in January 2017 from Goldman Sachs, where he was co-chairman of global mergers and acquisitions in the investment banking division. As well as leading Temasek’s Americas team, he is global head of agribusiness.

Raising the profile of Temasek (which is not known for speaking freely to the media) as a serious contender in the US market is why Vaske sat down with Private Equity International, an affiliate publication of Venture Capital Journal. We met at the investor’s offices in the Seagram Building at 375 Park Avenue, New York, something of a trophy address, which it shares with the likes of Clayton Dubilier & Rice, Strategic Value Partners and Centerbridge Partners.

Vaske is relaxed and jovial, joking about the previous day’s Bloomberg TV interview in which he said Temasek was excited about direct investment.

“That’s all we do,” he says, shaking his head. “I followed up with ‘early stage’, but I thought, ‘You sound like an idiot.’ It’s like saying, ‘I’m excited about breathing.’”

Temasek’s mandate, Vaske says, is simple: be a responsible steward of the shareholders’ capital. Founded in 1974 as a holding company for 35 companies owned by the Singapore government – including Singapore Airlines, telecommunications company Singtel and DBS Bank – for the first couple of decades Temasek was focused on growing those companies. In the early 2000s, it expanded that mandate globally, opening its first overseas offices in Mumbai and Beijing in 2004. Today it has 11 offices overseas.

“If we felt like we had access to all the opportunities in the marketplace, we would probably have a little less capital invested in private equity”

The firm has always been quick to point out it is not a sovereign wealth fund. It does not receive any pre-determined injections of capital from the government, has full discretion over its investment decisions and has an external board. Its goal, Vaske says, is to be a “good partner,” from a financial perspective and in terms of its broader impact on society.

“Our tagline is, ‘Do good, do right, do well,’” Vaske says. He highlights the firm’s investment focus on six “structural trends,” which guide investments towards a “better, smarter and more sustainable world”: longer lifespans; rising affluence; sustainable living; a more connected world; smarter systems; and the sharing economy.

“All of those things are consistent with where we find the greatest opportunity, meaning to have financial reward in terms of the returns we can generate, but also, frankly, the impact we can have on the underlying economies and underlying geographies in which we are investing.”

Temasek’s investments align with the UN Sustainable Development Goals, particularly focusing on environmental factors and combating climate change. This is in line with the organization’s stated aim of going carbon neutral in 2020, tracking and reporting its consumption of water, paper, electricity and air miles, and halving the greenhouse gas emissions of its entire portfolio by 2030.

Temasek is almost exclusively an equity investor, barring a little less than 2 percent of the portfolio in structured credit, which, Vaske says, is “really preferred equity or convertible or things of that nature, just a little bit above the capital structure than equity.”

Within equity investing, there’s “no lane we can’t traffic in.” Temasek considers investments in everything from mature companies to early stage, direct private investments, public securities and private equity funds. Private markets accounts for 42 percent of the portfolio.

“We’re not constrained by size or duration, so we can write small checks, we can play in multi-hundred-million dollar or multi-billion-dollar investments, and we can keep an investment going forever.

“Now, we underwrite to the same discipline as other aspects of private equity, which is we want to see at least visibility toward a path to monetization, to know that our capital is not just locked up forever. But at the same time, when that underwriting period ends, whenever it may be, we’re just as likely to re-underwrite and stay invested.”

For Temasek to have $1 to invest it needs to be freed up by either a dividend received or a monetization event. For planning purposes, it takes a two- to three-year outlook as to what the firm thinks cash inflows from those sources will be.

Vaske is reticent when it comes to discussing explicit returns objectives, saying only that the firm is “trying to generate positive wealth added.”

“We take a look at our cost of capital, that’s basically a capital asset pricing model, to determine what our cost of equity would be, and then we’re trying to get a positive spread on that,” he says, adding that cost of equity is calculated individually for each investment.

“It’s the same kinds of financial disciplines almost any corporate or other private form of investor might impose upon themselves.”

Temasek’s 10-year total shareholder return – a compounded and annualized measure, which includes dividends paid to its shareholders and excludes shareholder capital injections – stood at 9 percent in Singapore dollar terms as of March 31, 2019.

Temasek’s 400 investment professionals are split in two – half in Singapore and half distributed through 10 regional offices. They are organized into markets teams, for example, the Americas team and industry teams, such as TMT or financial services. To make an investment, both the market head and the industry head must agree it’s worth pursuing and staffing, and they will jointly present it to the investment committee.

“The allocation comes out of both budgets; we double count it to make sure people feel ownership and accountability.”

Each investment professional sitting in an industry group looks at all forms of investing within that group. Herein lies Vaske’s “most significant management challenge.”

“I don’t know that the best trader at a hedge fund in public securities is also the best early-stage investor, so I’m going to make sure our teams are constantly talking and complementing their skill set based on what they see in the market as an investment opportunity. Because there’s execution things that go into it that I think we’re good at it, but I think we could be better, and we’re not always as nimble as we could be.”

When it comes to what Temasek is trying to achieve through its investments, Vaske talks of Singapore’s desire to be “a relevant player” in the global economy. With a population of 5.6 million in a “fairly remote” part of the world, it’s not, as Vaske says, going to be through its contribution to the labor pool.

Key US investments include Impossible Foods, DoorDash, ClassPass and Visa. In 2017, Temasek made its first, and so far only, buyout on its own outside of Singapore when it acquired Global Healthcare Exchange from Thoma Bravo. Vaske says the transaction was the “right signal to the market” that it’s open to such transactions. However, these are likely to be few and far between.

“I think going forward, you’ll selectively see us do that from time to time. But for the most part, we’re someone else’s partner in everything we do.”

This can mean equal partners with other owners, but more often than not means Temasek is in a clear minority position.

In late 2017, Temasek co-led a $110 million funding round for Farmers Business Network, a farmer-to-farmer digital network offering data insights, input procurement and crop marketing services. It has subsequently backed another funding round.

FBN co-founder and CEO Amol Deshpande, formerly a partner at Kleiner Perkins, says Temasek “stands out among the crowd” of not only FBN’s investors but “all the investors I’ve even spoken with since I’ve been raising money for FBN.”

“In agriculture, I would rank them as the number one, not just the most active but also the most well-networked and the smartest money in this entire sector,” Deshpande says. “Having them has created brand value for us, but they also utilize that network and connections for the benefit of the business.”

Temasek has about $10 billion invested through private equity funds globally, a large proportion of which is in the US. At any given point it has about 50 GP-relationships. It has invested with funds from the likes of IK Investment Partners, Hony Capital, Golden Gate Ventures and Clayton, Dubilier & Rice, according to PEI data.

“We’ve done that to extend our network of relationships, we did it as a way to establish ourselves here. Those are really interesting and important relationships to have as we try to be a participant in the market.”

However, Vaske is clear that Temasek’s primary mandate is to be a direct investor.

“If we felt like we had access to all the opportunities in the marketplace, we would probably have a little less capital invested in private equity. I think we’d have some because it’s an interesting group of people to generate good returns and get good ideas, but we’re doing it primarily to get co-investment opportunities alongside them.”

“As an ag team, we’ve done an exhaustive study on vertical farming and where the opportunities lie, and there were a few priorities that rose to the top. So, when Bowery was in the market trying to do a capital raise, we had an informed point of view about where we want to deploy our capital and who we want to align ourselves with,” Vaske says.

Intelligent healthcare supply chains provider GHX is Temasek’s only buyout without a partner outside of Singapore. It acquired a majority stake in GHX in 2017 from Thoma Bravo, which retained a minority position. Temasek’s TMT team had been looking for a software-as-a-service investment such as this but had been beaten several times in auction processes.

“We went to Thoma Bravo pre-emptively and said, ‘Look, we want to own a business like this, we like this, we’ve studied it.’ The TMT team led it in close consultation with the healthcare team,” Vaske says.

“We’ve owned it for a couple of years, and it’s working well.”

Temasek first invested in California-based Impossible Foods – famous for making plant-based burger patties that sizzle, bleed and taste like beef – in 2017.
“Our ag team did a huge alternative protein study several years ago, and it turned out that we’ve invested in a number of companies, such as Impossible Foods,” Vaske says.

Temasek invested in SoundCloud – which, at the time, was struggling – alongside The Raine Group, a “longstanding partner”. The fund would not normally take on a business with clear operational challenges, but it was willing to partner with a firm that had a clearly articulated plan for what the turnaround would look like.

“We bought it at a pretty attractive level, so that our risk was, we thought, pretty minimal versus the potential for the upside,” says Vaske. “But we wouldn’t have done that on our own without someone who had a real operating thesis and the right people to drive it.”

A longer version of this story initially appeared in affiliate publication Private Equity International. Isobel Markham is editor of PEI. She can be reached at isobel.m@peimedia.com.

Carmela Mendoza and Alex Lynn from PEI contributed to this report.