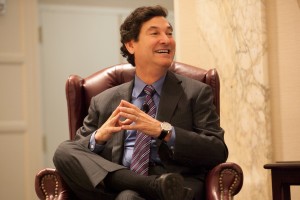 There’s something to be said for sticking with a job. It certainly has worked out for Jim Breyer, who joined Accel Partners as a newly minted MBA graduate in 1987.

It was a good call, reports affiliate publication Venture Capital Journal, which has named Breyer the recipient of its Lifetime Achievement Award, to be presented at the PartnerConnect LP-GP Summit conference today in New York. Over 28 years, Breyer has had a leading role in backing more than 30 consumer Internet, media and technology companies that have gone on the launch IPOs or sell in profitable acquisitions, according to Accel. He also has carved out a reputation as one of Silicon Valley’s most sought-after board members, having served or serving as director of Wal-Mart, Dell, Etsy and News Corp, among others.

Yet Breyer is best known for one investment. In 2005, he joined the board of a then obscure but fast-growing company called Facebook, which had just raised $12.7 from Accel for its Series A round. It looked like a risky deal by many measures.

With a reported $100 million valuation, it was on the expensive side for an early-stage company. Profits were a distant vision. And its founder wasn’t even old enough to order a drink at an early meeting with Breyer, let alone demonstrate a track record for scaling startups.

Everyone knows how that turned out. But it’s worth dwelling on some details. Though Accel led only one round, it held on to an11 percent stake in Facebook at the time it filed to go public. After the IPO, that stake was worth about $10 billion, and at current valuations, it would have a value of more than $20 billion. The deal turned Accel’s Fund IX, which made the investment, into what several LPs have called the highest returning venture fund ever.

But Breyer is not the kind of guy to retire. He has cut back on some of his duties, stepping down from the boards of Facebook, Walmart and Dell last year.

And in recent years, he also has made some additions to a slate of responsibilities that even workaholic venture colleagues have described as exhausting. This includes investing actively out of Breyer Capital, an equity investor focused on social entrepreneurs in the media, technology, education and retail industries. Investments include Harvard University’s Experiment Fund, Brightcover, Marvel Entertainment and Legendary Pictures.

Most recently, Breyer Capital ventured into the privacy arena, leading a $30 million summer round for Wickr, a mobile communication app that uses encryption to shield its self-destructing messages from prying eyes.

Last year, Breyer strengthened his ties with his MBA alma mater as well, when he was elected a fellow of the Harvard Corp, Harvard University’s senior governing board. He’s also still connected to his undergrad alma mater, Stanford University, sitting on the board of the Stanford Technology Ventures Program.

These days, Breyer remains quite the globetrotter, seeking out investments in China and emerging markets, as well as dividing his time between New York and Northern California.