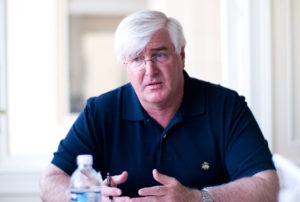 Ron Conway has been glorified and vilified for the wide spate of Internet investments that he made via Angel Investors L.P., which he founded in 1998.

He had his share of bombs, making him the subject of a book, The Godfather of Silicon Valley: Ron Conway and the Fall of the Dot-coms. But he redeemed himself as one of the few investors able to get a piece of Google before it went public.

Today, Conway is investing his own money, but what hasn’t changed is his enduring love of the Internet.

Q Which do you like better: investing your money, or investing other people’s money?

A I far prefer investing my own money, or at least investing small amounts of other people’s money. Investing a big [$150 million] fund was an interesting experience. I became very efficient at communicating clearly via email, but I wouldn’t do it again.

Q How do you feel about having your money managed? I recall your investment in Halsey Minor’s 12 Entrepreneuring incubator not panning out. [CNet founder Minor raised $137 million from a long list of Silicon Valley investors, including Conway. After 18 months, the investors asked for the remainder of their money.]

A God, that was an utter catastrophe. But yes, I’m involved with about 15 VC firms, where I’m an investor in two of their funds. But per their requests, I’m not going to name them.

Q Are you actively investing your own capital?

A I made about nine new investments last year, and this year I’ve made three. I invested in InStoreCard and Become.com. I also just invested in a stealth company out of Stanford. [InStoreCard helps its customers manage their retail loyalty and relationship marketing programs. Become.com is a comparison-shopping company founded by Michael Yang and Yeogirl Yun, the two entrepreneurs behind MySimon, which Angel Investors backed and that sold to CNet in 2000 for $700 million].

Q Some of the investments you’ve recently made involve people you’ve backed before, like Michael Yang. Do you back people a second time if they don’t manage to return money to you the first time around?

A Absolutely. Chris Alden [co-founder of Red Herring Communications] is a perfect example. I invested in the Herring and I made nothing but I backed Rojo Networks [an RSS startup]. I think Chris is stellar, so there I’m really betting on the person and the idea.

Q Have you backed someone who has returned money to you but who you wouldn’t fund again?

A Halsey Minor. Also several people from Angel Investors’ portfolio who I’d prefer not to name but who were unreliable and didn’t take advice.

Q What about Chris Alden’s startup appealed to you? Blogs and RSS services seem like tough places to invest.

A Well I wouldn’t invest in a blog company and I’m not planning to invest in a second RSS startup because I’m not an expert, and I think the jury is still out on those spaces. I much prefer the search space. That’s something I feel like I have my arms around.

Q So that’s where your focus mostly remains?

A Absolutely. It’s very hard to be an expert on anything and I’m trying to be an expert on search and even that’s going to be really hard, because I think search today is akin to what the Internet was in 1994-meaning that we’ll see an explosion in search just like we saw an explosion in Internet. I really think search will be a platform for a whole host of services, many of which haven’t even been conceived yet.

Q Any other areas of interest?

A I’m really concentrating on search and online advertising and commerce.

Q You told me last year that 20% of Angel Investors’ investments returned at least something, and that 5% returned what you characterized as significant returns, including Google, AskJeeves, RedEnvelope, and PayPal. Can you give me a ballpark number regarding how much Google’s IPO returned to the network?

A No, but for what it’s worth, I can tell you that we invested in the same round as Kleiner and Sequoia. [The three firms invested a combined $25 million in Google in 1999. A year later KP and Sequoia put up another $15 million. Together KP and Sequoia own about 45 million shares currently worth more than $7.8 billion.]

Q What do you make of the megarounds that we’re currently seeing, like that of online ad company FastClick and Webroot, an anti-spyware startup?

A I think those giant rounds are few and far between, particularly because anti-spyware opportunities are getting special attention right now. But they’re absolutely the exception and not the rule. Unless we’re entering another bubble, and then we’re all in trouble.

Q On the face of things, it seems that we’re very much entering another bubble. VCs can’t seem to fund online advertising companies fast enough. Do you disagree?

A I disagree that it’s a bad thing. I see online advertising only growing because it’s the most effective way to reach the right consumers, and advertisers love to pay for performance. They can’t measure exact performance on TV or radio. They can only do it through empirical data. But with the advent of Overture and Google’s AdSense, they’re paying for performance and they know the precise results of their efforts. It’s an advertiser’s dream media. That’s why I think it’s in its infancy. As more [advertisers] discover the beauty of [online advertising], and its accuracy and effectiveness, they’ll pour billions more of their ad and promotional budgets into it.

Q What do you make of Google’s enduring emphasis on returning the best search results, and through them, relevant advertising, as opposed to Yahoo’s approach of combining search with compelling content?

A Again, I just think that this market is so gigantic and the economics of it are so favorable that Google, Yahoo and many smaller players can all continue to build out successful enterprises.

Q What do you make of podcasting? Are there investment opportunities around it other than advertising?

A Content is really going to be king in that area. People with

intriguing content will be the ones who blossom in that space.

Q Where do you stand on social networking these days?

A I still think it’s going to be hard to monetize. I don’t see any material success in any of those [social networking] companies yet. LinkedIn is probably closest [to producing revenue]. I’m not privy to any of their numbers but they’d be the closest. And of course, I could be dead wrong about the whole trend. That happens sometimes. [Laughs.]