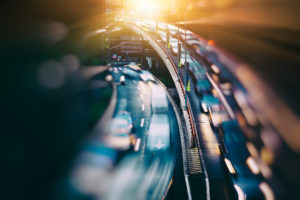 In recent years, investors have poured billions of dollars into autonomous vehicle technology and related mobile and transportation startups. More than $173.9 billion has been invested since 2009, according to a recent report from PitchBook.

And it looks like there’s no slowdown in sight. In a push for self-driving cars, funding for autonomous vehicles is expected to nearly quadruple by 2030. In addition, the micromobility industry could double by 2025.

Although some industry experts say there is an element of hype at play, more than $26 billion has been invested so far in 2019 across 432 deals, with micromobility and autonomous vehicles garnering a lot of VC attention.

Three of the top 10 largest VC deals completed during the first three quarters of the year involved autonomous vehicle startups, according to data from Refinitv.

San Francisco-based Cruise, a self-driving vehicle startup owned by General Motors, completed the largest deal of the year so far. In May, the company raised $1.15 billion from SoftBank, GM and Honda, among others, which valued the company at $16 billion.

SoftBank also invested $940 million into Mountain View, California-based Nuro, which plans to have autonomous vehicles ready for delivery in February.

Aurora, a developer of software for autonomous vehicles, gathered $530 million in a Series B round led by Sequoia Capital in February.

Menlo Park-based Autotech Ventures focuses on ground transportation. Garcia said that while he predicts autonomous vehicles will continue to attract capital, some segments of that market are more attractive than others.

Garcia said that autonomous vehicles that are Level 5, which means no human interaction at all, are still realistically more than 10 years away from being able to operate on the road despite being the market that is grabbing the most VC attention.

“To put a little rain on the parade, yes, while we as a firm believe it is an enormous opportunity, there has been a bit too much hype,” Garcia said. “It will take a really long time to get where you can operate on the road. When you are subject to regulations your market can be delayed.”

Autotech Ventures has been looking more closely at off-road autonomous vehicles, which are subject to less regulation and come with fewer safety concerns. As a result, some vehicles are already operating.

“I think the hype is wearing off right now,” Garcia said. “VC investment in this space is still going to continue, but it might have a little dose of realism. The opportunity is so huge for VC investment.”

The PitchBook report also highlighted the fact that micromobility, including bike sharing and electric scooters, could see a surge of funding over the next five years. The report predicts the industry could be worth more than $12 billion by 2025. It is currently worth about $4 billion.

Last month, Santa Monica-based scooter company Bird raised a $275 million Series D round to value the company over $2 billion. The round was led by Sequoia Capital and Caisse de dépôt et placement du Québec, an institutional investor in Quebec.

Garcia said that Autotech Ventures is interested in the scooter and micromobility space, but also thinks it may be overhyped due to there only being slight differences between the top competitors.

“We think scooters are going to increasingly be a useful form of transportation,” Garcia said. “We also have some concerns about that market that’s led us to stay on the sidelines for now and watch as some of the hype dies down.”

While many mobility segments are seeing funding surges, ridesharing has began to cool down, the report found.

There have been 20 deals in the space so far this year, which is a drop from the 38-plus deals the space saw in each of the last four years. While there is still Q4 to close deals, it is unlikely that the ridesharing deal count will reach levels from previous years.

The report states that the industry is still expected to grow 20 to 30 percent year-over-year as the ridesharing markets outside the U.S. continue to grow and mature.

For example, Grab, a Southeast Asia-focused ridesharing company based in Singapore, received a $1.46 billion capital infusion from SoftBank earlier this year.

Garcia agrees that international markets will continue to grow in this area and alternative ridesharing models will also continue to find success.

“What I observed some years ago was the convergence of the IT sector and the transport sector,” Garcia said. “Transport is one of the largest sectors on the planet and it has suddenly become a very active space for investors.”