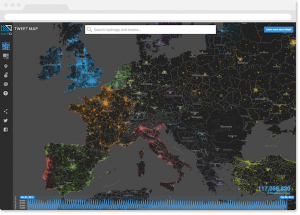 MapD, a big data analytics and visualization software company, has raised US$10 million in Series A financing. The round was led by Canadian venture capital firm Vanedge Capital, which also invested in MapD’s seed round in October 2014. Vanedge was joined by GV, Nvidia and Verizon Ventures. Based in San Francisco, MapD has developed GPU-powered technology that brings speed and interactivity to the data exploration process. With the Series A round, the company marked the public release of its platform. As reported by PE Hub Canada, Vanedge earlier this year raised $104 million in the initial close of its second information technology fund, Vanedge II.

It is with great pleasure that we today announce two significant milestones for our company: the general availability of our GPU-powered database and visual analytics software platform, and the closing of a $10M Series A round led by Vanedge Capital with participation from Verizon Ventures and Nvidia, joining earlier investor GV (formerly Google Ventures). This moment means a great deal to us at MapD as it marks the public release of a technology forged from tens of thousands of hours of design meetings and engineering work. For me personally, it has been a long and rewarding road, originating in my final project for a MIT database course in 2012 and inspired by the inability of conventional database tools to interactively query and visualize hundreds of millions of tweets for my Harvard graduate thesis on the Arab Spring.

So what exactly are we delivering to the world? At its heart MapD is a relational (SQL) database that leverages the massive parallelism and memory bandwidth of commodity GPUs to execute queries up to a hundred times faster than CPU in-memory technologies, given equally priced hardware. And while the MapD backend can be used as a standalone database, we have designed it to work hand-in-glove with our web-based visual analytics offering, MapD Immerse, which not only leverages the backend’s unparalleled SQL performance but also the native rendering abilities of server-side GPUs to deliver instant visualizations of complex datasets. The end result is a system that lets you immersively explore multi-billion row datasets without lag and in real-time, something CPU-based solutions simply cannot come close to delivering.

Our system has already found significant early traction across a range of verticals and use cases – all united by their need for zero-lag querying and visualization. Verizon is using it to interactively search for patterns and anomalies over high-velocity streaming log record datasets, where they previously had to generate static reports over the data. Simulmedia, a leader in targeted television advertising, is using MapD as a data discovery tool to assess inventory across large advertising datasets. And NPM, provider of the popular package manager for Node.js, is using MapD to query and visualize billions of log records per month.

We could not have gotten to where we are today without the incredible support we have received from our investors, partners and early customers. Moe Kermani and his team at Vanedge Capital recognized from early on the disruptive potential that GPUs could have on the database and data analytics space and have been our biggest believers since joining our seed round.

Nvidia is both hardware partner and investor and has been closely involved with our company since we won their $100K Early Stage Challenge Award in 2014. It would be impossible for our software to deliver such paradigm-shifting speedups without the continuous innovation that epitomizes Nvidia’s hardware, and their drive to push GPUs into HPC, machine learning and now data analytics.

Verizon Ventures invested after hearing about how we were enabling interactive exploration of a multi-billion record dataset belonging to one of the company’s network infrastructure groups and realizing the potential value of the software across the organization. And Rich Miner and Adam Ghobarah at GV have been amazing partners from the beginning when they saw our first demo showcasing interactive exploration of a billion tweets and were sold on the promise of GPU-powered data analytics.

While we are officially unveiling our product to the world today, we are only at the beginning of leveraging the GPU’s power for data analytics. In addition to adding more GPU rendering and geospatial features to the product, we plan to integrate advanced GPU-powered machine learning capabilities into the database and expose them through our Immerse frontend. Not only does this make sense from a hardware perspective – GPUs are widely seen as the best solution for a variety of machine learning algorithms – but it also dovetails with our mission of creating a unified analytics frontend that melds the best of human and machine driven insight.

Ultimately our goal is to shift the paradigm on what it means to do interactive analytics at scale. Analysts need to be able to explore their data unhindered by the latency of their tools. By harnessing the phenomenal parallelism of GPUs, MapD is addressing that need by taking query response times from tens of seconds or minutes down to milliseconds, bringing bring true interactivity to the data discovery process. So we invite you to learn more about our company and product by visiting our website and downloading our whitepaper. And if you’re ready to see how MapD can empower you to explore your own data at light speed, please reach out to us at sales@mapd.com.