Through the end of Q3, venture firms have completed 614 M&A deals, according to PitchBook’s latest North American M&A report.

While through the end of Q3, deal flow count is pacing slightly below last year’s total of 958 deals, the VC-backed portion of the entire M&A market has been increasing steadily since 2015, the report found.

This trend is expected to continue for several reasons, according to the study’s authors. 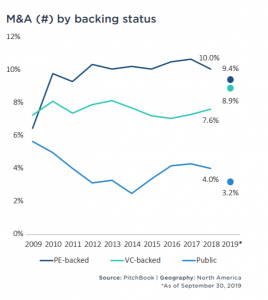 First, many corporations are finding that instead of building new technologies internally, it is more cost-effective to add them through acquiring a competitor, the report noted. This trend is in part a result of VC firms funding companies at unprecedented levels, allowing startups to develop products and technologies at a faster pace than their less nimble, larger incumbents.

Second, because of the recent poor post-IPO market performance of a handful of unprofitable companies, such as Uber and Slack, some investors and founders may prefer the guaranteed liquidity of a trade exit to the uncertainty of a stock market performance.

Lastly, M&A deal sizes continue to increase, especially for high-growth venture-backed companies, according to the report. Median company purchase price grew by almost 40 percent from $56.8 million in 2018 to $93.5 million for year-to-date, PitchBook found. 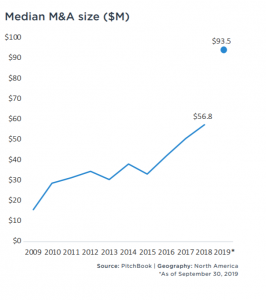