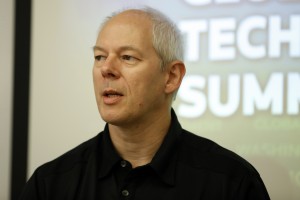 Cockcroft, who started with Battery in early January, said he will also help give Battery a more proactive presence at industry conferences.

Cockcroft told VCJ that the position is not a traditional VC role, but he has the equivalent seniority to a partner.

Cockcroft, who’s noted for his cloud computing expertise, said that he will look at investments in various industries. Among the technologies of interest to him are hardware and mobile, not just cloud, he said.

“I’ve played with 3D printers and the Internet of things. There are many things I want to look at,” he said.

In his own blog post, Cockcroft said he would counsel large enterprise companies who want to work more in the cloud, using remote computers that work over the Internet rather than proprietary centralized computers. In Netflix’s case, Cockcroft moved its streaming entertainment to Amazon’s cloud platform.

He told VCJ that in 2009, when he advised Netflix on moving delivery to the cloud, “everyone in the industry thought we were crazy.”

Bringing Cockcroft into the fold underscores Battery’s commitment to enterprise computing. Its prior investments in the sector include Akamai, an Internet delivery network, and Omniture, the online marketing and web analytics business which Adobe acquired.

Claremont Creek Ventures has hired Harsh Patel as director to its investment team. Patel previously worked as a general partner at RRE Ventures and In-Q-Tel. He also co-founded Orbit Commerce, where he designed a SaaS platform for small business ecommerce.

The Oakland-based firm also named Harveen Sethi as an associate. Prior to joining Claremont Creek, Sethi was a senior manager at Medtronic. In addition, Sethi previously worked on enterprise technology and analytics projects at Accenture.

Ted Driscoll of Claremont Creek said that Sethi is “particularly enthusiastic about the potential of big data analytics and technology in advancing predictive diagnostics and personalized medicine.”

Accel Partners has promoted Philippe Botteri and Michiel Kotting to partner. Accel also has added three new vice presidents, two associates and an executive-in-residence. Accel’s team in London is now the largest it has had since it entered the European market in 2000. The personnel moves come after the firm closed its Accel London IV fund on $475 million last year.

Merck Global Health Innovation Fund, the venture arm of drug maker Merck & Co, has appointed Joel Krikston as a managing director. In his new role, Krikston will lead venture capital investments with a focus on digital healthcare innovations in areas adjacent to Merck’s core business of pharmaceuticals and vaccines.

Prior to joining Merck GHIF, Krikston was an investment principal at Johnson & Johnson Development Corp, where he was responsible for equity investments in support of J&J’s operating companies and emerging growth platforms.

Seattle-based Vulcan Capital has hired Sean Meeker as an associate director. The appointment is effective in late February. Previously, Meeker worked at Goldman Sachs, where he most recently headed the loan and loan credit-default swap trading.

New Enterprise Associates has named life sciences veteran Dr. Elliott Sigal as a venture partner and senior advisor to help augment the firm’s healthcare practice. Sigal is a former executive vice president and director at Bristol-Myers Squibb, where he served as the company’s chief scientific officer and president of R&D from 2004 to 2013.

Austin Ventures has hired Greg Stock as an entrepreneur-in-residence, in which he will focus on software investments. Prior to joining Austin Ventures, Stock worked at Macheen as president and CEO and remains chairman of the company. Prior to that, Stock was chairman and CEO of Vovici, an Austin Ventures portfolio company.

Wong moves from GGV to Qiming

Qiming Venture Partners, a China-based venture firm, has hired Helen Wong as a partner focused on investments in the Internet and consumer sectors. Wong spent 11 years at GGV Capital and Venture TDF. She was an early investor in Tudou, which listed on the Nasdaq and merged with Youku at a valuation of more than $1 billion.

Pappas Ventures has promoted Scott Weiner, who joined the firm in 2006, to partner. Weiner played a key role in the firm’s successful investments in TESARO, Achillion Pharmaceuticals and Athersys. Prior to joining Pappas, Weiner was with Silverback Asset Management’s life science fund.

Summit Partners has hired Mark Crews as an executive partner. Previously, Crews worked at Lufkin Industries, where he served as senior vice president and general manager of the oilfield division.

The growth equity firm has promoted four of its staffers. Leonard Ferrington is now managing director, while Andrew Collins, Matthew Hamilton and Jay Pauley have been upped to principal. Ferrington and Collins are based in the firm’s Menlo Park, Calif. office. Hamilton and Pauley work out of Summit’s Boston-based office.

Insight Venture Partners has named Euan Menzies as a venture partner. Menzies is the former CEO of Vertafore. New York-based Insight invests in the software, internet and data services sectors.