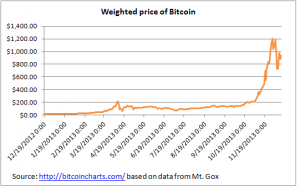 Controversy continues to swirl around bitcoin, but that hasn’t stopped venture capitalists from making ever bigger bets on companies focused on the volatile digital currency.

This week Andreessen Horowitz led the biggest bitcoin deal to date, a $25 million Series B round for Coinbase, which operates a Web-based electronic wallet used for sending and receiving bitcoins. Series A investors Ribbit Capital and Union Square Ventures also joined in the follow-on round, which brings Coinbase’s total funding to $31.28 million.

When VCJ last wrote about VC interest in bitcoin in May, we found that just six bitcoin-related startups had raised about $11 million from venture capitalists and angel investors. Seven months later, the number of VC-backed bitcoin companies has grown to at least 15 and the amount they have raised has swelled to $62 million.

See the attached table for all the details. And if you’re aware of any deals we’re missing, please email Lawrence.Aragon@ThomsonReuters.com.

For the uninitiated, Bitcoin is a decentralized digital currency that is created using cryptographic techniques. It is controversial because it is unregulated and has been used by some people to make illegal purchases on black market websites such as Silk Road, which was shut down by the FBI in October. Bitcoin is also controversial because it has attracted currency speculators who have caused wild price swings – the price of a single bitcoin rose as high as $1,200 on Nov. 30, but has since come down to $932, according to bitcoin exchange Mt. Gox.