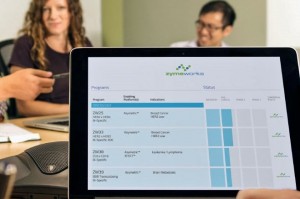 Zymeworks Inc has closed its previously announced acquisition of Kairos Therapeutics Inc, a specialist in antibody drug conjugates. No financial terms were disclosed. The merger of the two Vancouver-based companies creates “one of the industry’s leading biologics drug discovery and development organizations,” Zymeworks said. Zymeworks, a developer of antibodies and antibody drug conjugates for the treatment of cancer, autoimmune and inflammatory diseases, secured about $87 million (US$61.5 million) in a Series A financing in January. The round was co-led by BDC Capital and Lumira Capital.

VANCOUVER, British Columbia–(BUSINESS WIRE)–Zymeworks Inc., a leader in the development of bi-specific and multi-specific antibodies, announced today that it has completed the merger and acquisition of Kairos Therapeutics, specialists in the discovery and development of antibody drug conjugates (ADCs), spun out of The Centre for Drug Research and Development (CDRD). The integration of Kairos’ technology and pipeline with Zymeworks’ research platforms creates one of the industry’s leading biologics drug discovery and development organizations. With the completion of the acquisition, a number of Kairos staff will join Zymeworks, including John Babcook, President & Chief Scientific Officer of Kairos, who will join Zymeworks as Senior Vice President of Discovery Research.

Along with key scientific talent, the Kairos acquisition provides Zymeworks with a proprietary next-generation antibody-drug conjugate platform based on novel toxin, linker, and site-specific conjugation technology. This platform is synergistic with Zymeworks’ Azymetric™, AlbuCORE™, and EFECT™ technologies and will enable the design of highly targeted and potent bi-specific antibodies and multivalent protein therapeutics across a range of indications. The Kairos platform has the potential to be a key enabler of personalized medicine as it allows for the development of therapeutics that target cancer with increased potency and efficacy, while reducing toxic side-effects.

Zymeworks is transitioning to a clinical stage company, with its two lead compounds nearing first-in-human clinical trials. In addition to its platform technology, Kairos brings a pipeline of partnered ADCs targeting novel cancer targets with the potential to move into clinical development in the near term.

“The completion of this merger is a transformative event for both Zymeworks and Kairos, and brings us closer to our goal of delivering life-changing medicines to patients who need better options,” said Ali Tehrani, Ph.D., President and Chief Executive Officer of Zymeworks. “Combining Kairos’ superior ADC technology with our platforms, scientific experience, and resources positions us as a clear leader in the field of biotherapeutics with tremendous potential to discover and bring forth new medicines.”

“The Kairos team is excited to complete the merger with Zymeworks and bring together protein engineering, ADC, and bi-specific antibody technologies that will significantly enhance our ability to create innovative medicines that make a meaningful impact to lives of patients,” said Babcook. “We believe that by combining forces we will be able to expedite the development of a pipeline of best-in-class therapeutics. I also want to recognize the pivotal role CDRD played in enabling the development of this technology. Their platform is proving invaluable in creating and supporting a new generation of leading life sciences companies.”

The combined company will continue to be headquartered in Vancouver. Financial details were not disclosed.

John Babcook has more than 20 years of experience in biomedical research and biologics, as well as first-hand experience commercializing these technologies. Earlier in his career, Babcook led the development of the Selected Lymphocyte Antibody Method (SLAM™), a novel strategy to generate monoclonal antibodies from single, isolated lymphocytes. Based on this technology, he co-founded ImmGenics Pharmaceuticals, Inc., which was acquired by Abgenix and subsequently Amgen, where he led the Canadian research team, specializing in creating therapeutic antibodies. During his career, Babcook has worked to advance more than 100 therapeutic antibody-based programs, 11 of which are currently in clinical development, including three antibody-drug conjugates.

Babcook also led the establishment of the Biologics Division at CDRD where he has served as VP Biologics. He is currently an Adjunct Professor in the department of Molecular Biology and Biochemistry at Simon Fraser University. He is the recipient of the LifeSciences British Columbia “Innovation and Achievement” Award and of an Honorary Doctorate from the British Columbia Institute of Technology for his significant scientific and business-related contributions to the biotechnology industry.

Zymeworks is a privately held biotherapeutics company that is developing best-in-class Azymetric™ bi-specific antibodies and antibody drug conjugates for the treatment of cancer, autoimmune and inflammatory diseases. The company’s novel Azymetric™, AlbuCORE™, and EFECT™ platforms, its Zymelink™ conjugation platform and cytotoxins, and its proprietary ZymeCAD™ structure-guided protein engineering technology, enable the development of highly potent bi-specific antibodies, multivalent protein therapeutics, and antibody drug conjugates across a range of indications. Zymeworks is focused on accelerating its preclinical biotherapeutics pipeline through in-house research and development programs and strategic collaborations. More information on Zymeworks can be found at www.zymeworks.com.