Many of us take some sort of nutritional supplement throughout our day, whether we’re professional athletes, office workers or something in between. So many of us, in fact, that the nutritional supplements market is projected to reach $621 billion by 2030, according to a report by Research and Markets.

While it’s easy to drink a protein shake after the gym or throw a scoop of greens into some water and chug it before we can taste it, some say our bodies need more than that to function optimally.

Rootine is a cellular nutrition company that has just raised $10 million in its first Series A round. Its product, a small package of personalized micronutrients, has thousands of daily users, among them professional athletes including NFL Pro-Bowler Brian Burns II, UFC competitors Miranda Maverick and Matt Brown, and Olympic champions Brianna Decker, Lauren Sesselmann and Taylor Gold.

“We really saw this opportunity to empower people to leverage their data in a better way to achieve optimal health through nutrition,” Rootine co-founder and CEO Rachel Sanders tells Venture Capital Journal. “Consumers are gaining access to more health data than ever before and it’s really a question of how do you harness it. How do we actually use it to make people look, feel and perform better on a daily basis?”

Sanders began her career in healthcare investment banking and wondered why nobody was using the advancements in sick care as preventative measures to improve quality of life before sickness ever occurred.

“Our members are really what we call the everyday high performer,” says Sanders. “It’s people across genders that are looking to elevate their life at home, at work and on the field. So we have professional athletes, but there’s also parents, executives; it’s people that just want to be and feel better across the board. That’s really our core demographic, people who are already taking action with their health and they come to us because we have a much more data-driven approach.”

Membership begins at $69 per month for three months. Rootine also gets revenue from testing. It charges $115 each for a DNA test and blood vitamin test and $125 for a mineral test. (Users can get a 15 percent discount if they bundle all three tests together.) The company uses the data from the tests to develop a personalized supplement formula for each of its users. Once a user’s test results are analyzed and put through Rootine’s AI-driven algorithm, the samples are destroyed and the data is made available only to the user.

Rootine bases its formulas on nutrigenetics, or the study of how a person’s genetics impact their nutritional requirements. Sanders’ co-founder, Daniel Wallerstorfer, has a doctorate in biotechnology and has spent the majority of his 14-year career studying nutrigenetics.

“It’s a health-data-point specific angle, so we look at over 100 health data points per member,” said Sanders. “We look at lifestyle, so things like age, weight, biological sex, activity levels, diet, as well as blood levels and DNA, and the outcomes from taking Rootine. We take all of the data, we analyze it, compare it to clinical studies, and then we build you a unique formula and deliver it to your door.” 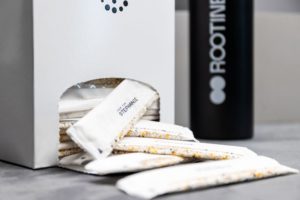 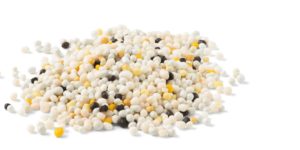 Unlike traditional supplements that come in the form of powders or pills, Rootine uses a relatively new method of nutrient delivery – microbeads – which look similar to Nerds candy. They allow for individual nutrients to be dosed down to the microgram, opening the door to a level of accuracy never before found in the supplement industry, according to Rootine. Microbeads are also a slow-release nutrient delivery system, meaning that water-soluble nutrients like vitamin C are steadily released into a person’s bloodstream throughout the day, rather than all at once.

“There are many ways to consume the microbeads – you can take them with liquid, stir them into a smoothie, add to your food, like an acai bowl, or even sprinkle on your ice cream,” says Sanders, noting that an estimated 40 percent of the US populace “can’t or won’t take large pills, so this really opens up accessibility and further democratizes access, which is one of our core pillars as we think about expanding.”

Rootine’s mobile app provides users with visual representations of each nutrient in their formula and where their levels fall on the standard clinical range. Over time, users can see how their levels change and can identify areas to focus on and learn about their cellular nutrition.

Rootine tracks outcomes through self-reported results, blood tests and, will in the future use wearable device data.

Rootine has raised roughly $14.5 million to date, with its Series A led by Relevance Ventures alongside commitments from Techstars and DSM Venturing, the venture capital arm of global health and nutrition company Royal DSM. With the bulk of Rootine’s product R&D finished, its latest financing round will be used for marketing to grow its membership and to bolster its small team with a number of key hires.

“What made Rootine really interesting to us is they’re the first company we’ve seen that says, ‘OK, give us all of this data, and then we’ll figure out what you need from a supplement perspective,’” says Relevance Ventures co-founder and managing partner Cameron Newton. “They have a lot of really interesting IP and trade secrets around manufacturing. We think they have something unique, and it would be very difficult for a pill manufacturer to replicate what they’re doing – almost impossible, quite frankly – because of the time-release nature of microbeads.”

VCJ was unable to find any other companies that do exactly what Rootine does. Its closest competitor appears to be Baze, which uses a blood test to determine a user’s micronutrient needs. Based on the blood tests, Baze sends each user a monthly box of pill-dosed vitamins and minerals. Baze raised a total of $7.92 million across three venture rounds before being acquired in 2020 by Nature’s Way Products, a subsidiary of German pharmaceutical manufacturer Dr. Willmar Schwabe GmbH & Co KG, according to PitchBook.

Rootine plans to expand its product suite and its user base before considering a possible exit. Relevance may be uniquely positioned to help along the way. Two of its portfolio companies, Ombre and DietID, analyze gut health and microbiome to determine a body’s ability to synthesize the nutrients it is fed. Rootine plans to integrate gut health and microbiome data in the future, so Ombre and Diet ID both present good partnership opportunities, Newton says.

“One, you get your diet diagnosed; then getting all of your data from your blood, mineral tests, wearables data, microbiome data, then it shows you what you should be eating, how to bridge from where you are to where you want to go, and then how to supplement yourself along the way,” he adds. “I think they all fit together to help consumers really get a complete health picture.”